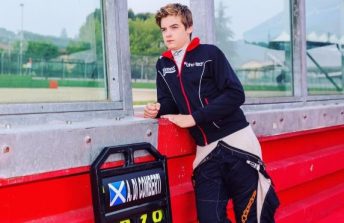 MEDIA RELEASE: Lanan Racing has today (20 February) confirmed that it has signed 16-year-old Aaron Di Comberti to its BRDC British Formula 3 Championship team for the 2017 season.

The teenager already has experience of the Tatuus-Cosworth car which is used in BRDC British F3, after supplementing his outings in FIA F4 with a number of tests with Lanan Racing during 2016.

Di Comberti said: “I have been training hard over the winter to ensure I make the best possible use of the testing ahead of the first race of the championship at Oulton Park. I’m really looking forward to the year ahead and I can’t wait to get started.”

Graham Johnson, Team Principal of Lanan Racing, commented: “Aaron started testing with us late last year and was very impressive given his lack of experience. I’m looking forward to seeing him progress his way up the grid.”

The 2017 BRDC British Formula 3 Championship season, which features 24 races across eight rounds, gets underway on April 15-17 at Oulton Park.