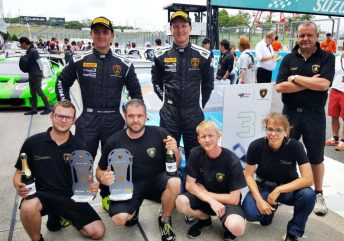 Front-running Lamborghini Super Trofeo Asia driver Rory Collingbourne added to his already impressive tally of podium finishes during the third event of the season at Suzuka in Japan over the weekend, 24th/25th June, with an excellent top three finish in round five.

Off the back of a fabulous double podium during the previous event at Chang International Circuit in Thailand, the 19-year-old from Newport in Wales was again in the mix for silverware throughout at Suzuka – although the task was made harder with no radio communication during the event.

Collingbourne, who is part of the Veloce Sports management stable, wrapped-up the third race meeting of the season third in the championship along with team-mate Ben Gersekowski with the duo adding a top five result in round six to the podium they achieved on Saturday.

“There was a lot to get my head around this weekend and the first few laps made me double-think, it was quite tough and especially with the target times we were aiming for”, said Collingbourne, “The sim work I did before going to Suzuka really helped though and after a few laps I was the quickest driver in the team, which was nice to achieve. I’m very happy with the performance we showed.

“We had no radio communication throughout the whole weekend, though, so that made things a lot harder on track to plan strategy. We only had 30 minutes testing before qualifying, so there was a lot to learn in a short amount of time, and it was the first time the team had been to the track. With 19 corners, set-up was key and we worked hard to give ourselves a front-running car.”

Making good progress during free practice, the Leipert Motorsport team-mates headed into qualifying targeting a slot on the first three rows of the grid and achieved their aim with Gersekowski lapping fifth fastest for the race one grid, Collingbourne doing likewise for race two.

The Australian took the opening stint for round five on Saturday and maintained position all the way to the driver change stop at the end of lap 11. Collingbourne climbed aboard the No.2 Lamborghini Huracan and after a great pit-stop by the team, he emerged in third when the race order settled.

Lapping competitively, the first year GT racer came under significant pressure from the No.63 car which, on the last lap, was just able to edge ahead. As a result of a 30 second penalty for the rival Emperor Racing entry, though, Collingbourne took his third outright podium of the season.

With rain arriving at Suzuka on Sunday ahead of round six, officials decided to start the race behind the Safety Car with Collingbourne taking the opening stint. Marking another first for the rookie Super Trofeo driver, when racing proper began on lap three Collingbourne was held-up behind the fourth placed car which didn’t anticipate the start.

Enabling the top three cars to break away from the rest of the pack, the Welsh driver sat in fifth position and as the race evolved he started to apply more and more pressure. Circulating two seconds per lap quicker than the car ahead, Collingbourne closed to within just a few tenths and then moved up into the top four when pit stops began to be served.

Pitting at the end of lap nine, Collingbourne handed the Huracan over to his team-mate who held fourth place when the race order settled. Driving well to keep his pursuers at bay Gersekowski didn’t put a wheel wrong but, after mistakenly catching the pit-lane speed limiter on the steering wheel in the heat of battle on the penultimate lap, he lost vital momentum and slipped to fifth.

“We did have a new team in the championship [this weekend] with two Pro Japanese drivers, so we knew we would have some extra competition, but from fifth to third in the first race showed our true competitiveness – it was a top team effort”, reflected Collingbourne.

“I started race two from fifth and we had a Safety Car start, that was a first for me. When the Safety Car pitted, the pole driver went flat out about three corners before the end of the lap and he pulled a big gap to second. Everyone else was caught-out and I was stuck behind P4, so we kind of lost out there as the top three were able to get away. Overall, though, it’s been another great weekend.”

He added: “I’m so happy with how things are going this year, everything is moving in the right direction with options already opening for next year so things are looking good. We’ve got a bit of a break now until the next round at Fuji, another track I can’t wait to race at for the first time.”

Delighted with Collingbourne’s continued progression in endurance racing, Veloce Sports’ Rupert Svendsen-Cook said: “Rory just keeps on impressing in his debut season of GTs, to rack up another podium and show the speed he did, at such a challenging place like Suzuka, is really very good.”

There is now a break of roughly two months in the Lamborghini Super Trofeo Asia calendar with rounds seven and eight taking place over the weekend 19th/20th August, at Fuji Speedway in Japan.