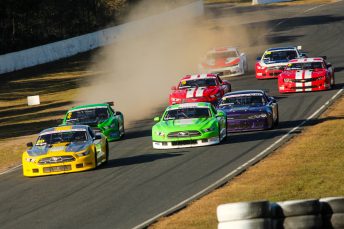 The 2017 Trans-Am 2 Australia Series draws to a close this weekend, as the Queensland Trans-Am 2 Racing Series heads to Lakeside Park for their season finale on September 30-October 1 in support of the Lakeside 300.

Eight cars will hit the track to round out the season, including the debut of Sports Sedan racer George Kulig, and Saloon Cars racer Paul Jarvis in Chevrolet Camaros. Jarvis will take the reigns of the car owned by his son, Ashley, who will focus on his commitments in the Lakeside 300 endurance race.

Mustang driver Russell Wright (460 points) currently holds a dominant 103-point lead over Anthony Tenkate (357 points), with 105 points up for grabs across qualifying and the four races at the historic Lakeside circuit.

In what has been a building year for the series, category manager Craig Harris is impressed with the level of interest garnered leading into a breakout 2018 season.

“We’re at the stage of confirming our 2018 calendar. I would suggest we’ll see a lot more interest in the category once that calendar is revealed,” said Harris.

“We’ll have close to 20 cars on track by early next year.”

“It’s very cost-effective racing, we don’t spend more money trying to go quicker than the next car as they don’t require that level of maintenance.”

“The fan response has been great. They’re fast, good-looking cars, they sound great and they throw flames on down changes.”

The final round of the 2017 Queensland Trans-Am 2 Racing Series commences with general practice on Friday, followed by qualifying and four races to conclude the 2017 racing season.