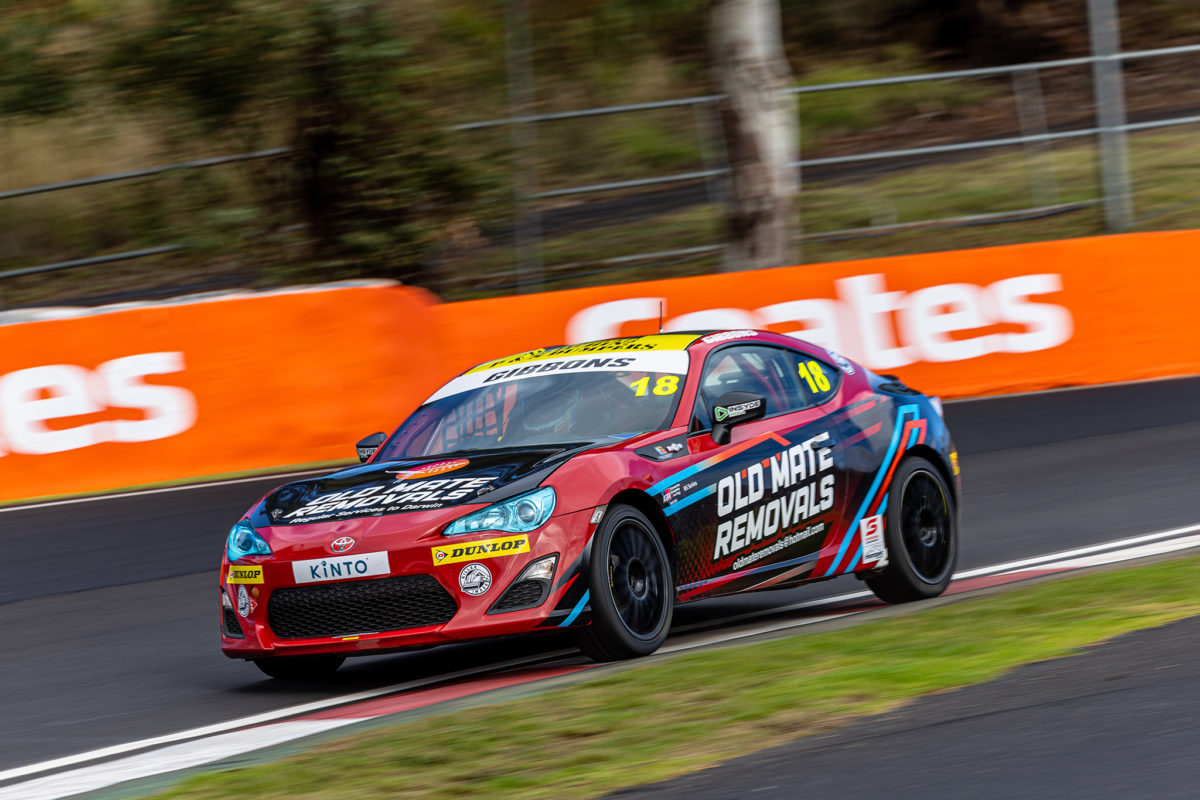 A strong second round of the Toyota GAZOO Racing Australia 86 Series at Bathurst has seen Sydneysider Lachlan Gibbons extend his championship points lead.

Held alongside the Bathurst 12 Hour, the one-make series completed three action-packed races at the iconic Mount Panorama circuit in the lead up to the international endurance event. An event and a venue that is one of Gibbon’s favourites.

“I absolutely love Mount Panorama and it’s definitely my favourite track in Australia, the atmosphere is always buzzing and you never know what to expect from a weekend, as evidenced by the weather this time!” said the 25-year-old.

“It’s a driver’s circuit, and nothing will ever quite match the feeling of tipping the car into Skyline to begin the descent to the Elbow.”

“The racing is exceptionally good in the 86 Series at Bathurst because the draft makes a big difference. You can’t really get away while in the lead, so you have to race strategically the whole time to position yourself for the end of the race.”

“The crowd is always a madhouse and it’s awesome to have people hanging over the fence cheering you on the whole time.”

“It was especially cool to be on the same program as the Bathurst 12 Hour, an internationally renowned endurance race attended by some of the best drivers in the world.”

Off the back of a perfect opening round of the series at Sydney Motorsport Park, Gibbons admitted the pressure was on at Mount Panorama.

“Coming off the back of a perfect round in Sydney for Round 1 I felt quite a bit of pressure to keep that form going into the weekend, particularly given how close it is between the top few drivers in the series,” said Gibbons after the weekend.

“The margins are really small between being in front and being at the back end of the top 10 so I knew qualifying would be critical to scoring good points for the championship.”

With that in mind, the 2019 Kaizen Award winner played a strategic game in qualifying to secure a front-row start for the opening race of the weekend.

Despite some mechanical issues, Gibbons continued that front running form in the first two races of the weekend to secure two podium results. Third in Race 1 and second in Race 2. Both races were highlighted by some cunning moves by the series leader around the outside at both The Chase and The Cutting.

The third and final race at Mount Panorama saw the 25-year-old lead the race early, however after an intense six-car battle at the front of the field, he would ultimately finish fourth to add to a solid bank of points for the weekend.

“I’d like to recognise the immense effort from the team over the weekend to get the car sorted for me to be able to mix it up at the front,” Gibbons continued.

“They did an incredible job and changed everything from injectors to DI pumps to ECUs in the hunt for an issue we had. They barely stopped for 10 hours each day.”

Gibbons now turns his attention to the next round of the series which will be held alongside the Supercars round in Townsville in July.

“Despite not getting a win over the weekend, I was able to extend my lead in the series by a significant margin which is very positive going into the middle part of the season.” he explained.

“I am excited to head back to Townsville after not being able to get there due to lockdowns and travel restrictions last year, we did relatively well last time I went and it’s the home event for one of our sponsors so I’m looking forward to a good weekend.”

“As always, thanks to our partners Old Mate Removals and P&S Dumpers for their ongoing support and I hope we can press the advantage at Townsville.”