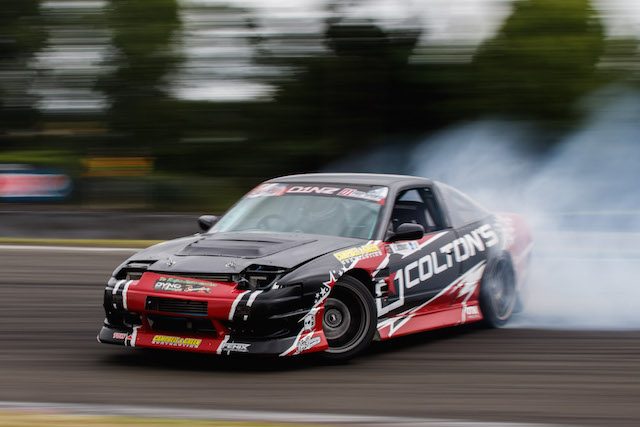 Kyle Jackways drifts through the hairpin at Manfeild Circuit Chris Amon on his way to pole position. pic: Simon Chapman

Qualifying for round two of the series took place in blustery conditions. The first few runs were scrappy, as Edmand Chan spun on his run, and Arthur Lee straight lining the hairpin exit. The top-four all suffered zero runs, with Martyn Davies the first into the points run, with a 54-point run.

Sporting a new look Nissan Skyline R34 front on his Nissan Laurel C33, Michael Thorley looked strong on his first run. However, his promising run fell through as he slowed and straight lined the exit of the final corner.

Driving his jet-black Mazda RX-7, Neil Walmsley was the first to put in a competitive points score, with 70.5 on his first run.

Former V8 touring car driver, Matt Higham, broke into the top-10 with his first run. The Nissan Silvia S15 pilot put in a clean first run, but lacked angle and style to go with his strong line.

Round one winner at Dunedin’s Forsyth Barr Stadium, Kyle Jackways, laid down a top qualifying run on his first time around the Manfeild circuit.

The first run through proved to be tricky for a lot of the Pro-Sport competitors, with nine of the near 40-car field failing to set a score.

After the field filled through, Kyle Jackways led the way on 81-points, followed by Bruce Tannock and Neil Walmsley equal second on 70.5-points. The surprise feature was John O’Gorman in fourth on 69.5, with Tully Puckey in fifth on 68-points.

Despite losing third gear, Michael Thorley battled through his second run to go from a zero to 60-points to put him into 15th—A valiant attempt given the circumstances of his second run.

The second round of qualifying runs continued, and it was Jackways again laying down the gauntlet with an almost identical run. With an 80-point run, Jackways was just one point off his first run.

Jared Coombes launched himself from 20th on the board to second with a stellar run through. He scored big in line and angle, to set a 73.5-point run. Coombes was followed by Puckey, who couldn’t improve on his third place position with a 68-point score, no better than his first run.

Having fallen to fourth, Tannock spun on his second run through turn two of the drift section.

As the remainder of the field completed their second run, the order finished with Jackways atop the order, Coombes second, Puckey third, Tannock fourth, and Walmsley completing the top-five.

Battles in the Pro and Pro-Sport Series for round two of the Demon Energy D1NZ National Drifting Championship takes place on January 7. For more information visit D1NZ.com — tickets are available on the gate.