Kurtz ‘over the moon’ with first Australian Solo Speedway title

Kurtz ‘over the moon’ with first Australian Solo Speedway title 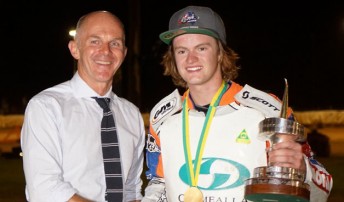 The 19-year-old secured his first senior Australian title following an exciting fourth and final round at Mildura’s Olympic Park Speedway on Sunday evening.

In warm conditions that reached up to 40° during the afternoon, Kurtz recorded 11 points in the final round to finish on 55 points overall for the Championship – one point ahead of fellow New South Welshman Sam Masters and Victorian Max Fricke on 52.

The Cowra product said he was elated to join the illustrious list of Australian Speedway champions.

“It’s an unbelievable feeling, and it’s been a massive thing for me ever since I was a kid, and to actually do it is pretty cool,” Kurtz said.

“It’s an awesome title to have behind my name. Being so young, I wasn’t really expecting to win it this year, but I’m over the moon about it.”

Kurtz’s win didn’t come without some controversy, however, with the youngster disqualified from the A Final for touching the tapes.

The subsequent three-man final was eventually taken out by local star Justin Sedgmen, who led from start to finish in a commanding display over Fricke (second) and Masters (third).

Kurtz conceded he did have fortune on his side during the evening, and despite the confusion following his disqualification, was happy to hold off what was a tough and unrelenting field of competitors.

“I’m not really sure (what happened) to be honest; no one really knew what was going on,” Kurtz said.

“Once I made the final, I didn’t really think I could go too far wrong from there.

“I screwed up and touched the tapes and got excluded, but I still got the point for making the final and Sam (Masters) ran third in the re-run and didn’t score enough to pass me, so I guess I had a bit of luck with me.

“Mildura’s definitely not one of my best tracks to be pushing for the win on, and Sam did well all night and all series, so I couldn’t get away from him.

“But it ended up that luck was on my side and I was good enough to get the win, so I’m stoked with it.”

Despite the feat, Kurtz is mindful that there is still plenty to achieve in 2016, and hopes his first Senior Solo title will act as a springboard into a successful season.

“We obviously all celebrated on the night, but I’ve got the Under 21’s (Australian Under 21 Solo Championship) coming up so hopefully I can get another one,” Kurtz said.

“I’ll be looking for another win at the Under 21’s, and then chilling out for a couple of weeks before going back over to the UK and hopefully having a good season over there.”