KTM dominates GT4 category at Bathurst, but no silverware

KTM dominates GT4 category at Bathurst, but no silverware 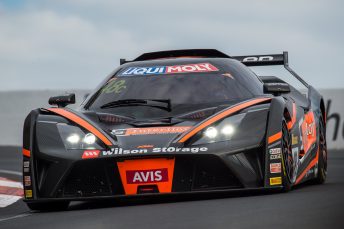 The KTM XBow impressed at the Bathurst 12 Hour

MEDIA RELEASE: By the time the chequered flag flew to complete the 12th and final hour of the 2017 Bathurst 12-Hour, the Interlloy/Wilson Storage KTM X-Bow had decimated the GT4 (Class C) field at Mount Panorama, but whilst the standout in the class, they were forced to withdraw from the event two hours from home, whilst a lap and a half up on their rivals.

“Devastated,” was all that team-boss Justin McMillan could muster as the team discovered they would be unable to return the car to the race. “We were doing it easy, but a freak set of circumstances means we can’t repair the car in time to complete the race.”

Ultimately it was the hot Australian summer that put paid to the efforts of the #48 crew, but not in the instance you’d expect. At one point the car was forced off the circuit by one of the faster – and more aggressive – GT3 cars, something which allowed dry grass to collect in the floor of the car. This ultimately ignited a couple of times across the event, the final time also burning through brake lines which sealed the fate of the mighty KTM.  To that point though the car was electrifying, with all four drivers turning a strong sequence of laps, Reter Engineering star Tomas Enge the standout, dropping the KTM’s qualifying best of 2:17.713 to a stunning 2:16.199 as they set about opening a strong lead over the field.

McMillan started the car at 5:45am and was running inside the top three for much of his stint, in the process shaving off an impressive four seconds off his best lap time. Regular team-mate Glen Wood then took over the reigns, where immediately after his first stop to refuel, he was forced into a spin at the unforgiving Cutting, fortunately without any contact – part of the issue was that the driver canopy had come slightly ajar, with the Victorian unable to seal it closed whilst strapped into the cockpit.

He was soon on his way again, and very quickly punching out lap times that moved him into the lead of the Class. KTM star Reinhard Kofler took the next stint to extend the KTM’s lead, whilst Enge turned a string of stunning lap times to put the lead completely out of reach for the team’s rivals, but on Wood’s return to the car, things started to once again ‘heat up’. Coming down Conrod Straight – the fastest section of the circuit – Wood lost brake pressure and immediately pulled into the pits and ultimately retirement.

“You couldn’t fault the car at all,” Justin McMillan admitted afterwards. “The incident which forced us out was something which you would not have expected, but something which will never happen again. Despite everything the car is still immaculate, damage is confined to the brake lines and a small amount of electrics, but the car is okay. Our pace was impressive and clearly good enough to win the race, but that’s motorsport sometimes!”  For Tomas Enge, who made an impressive debut at the mountain, the result was not what he’d been looking for. “Today we saw what a tough race this is, and how many didn’t finish. It obviously hurts that we went out as a result of a chain reaction like this, and not because of a mistake or a technical failure. Nevertheless I believe that we showed the KTM X-Bow GT4’s real potential.”  Like Enge, the 2017 event was Reinhard Kofler’s first visit to Mount Panorama and he echoed Enge’s thoughts. “Of course extremely annoying to go out like this, but you can’t complain in motorsport. We’ll give everything in the next race to make sure the KTM X-Bow is the one that wins. That will happen, we’ve already proved it.”  For the final member of the team – Glen Wood – the result was sheer disappointment, but on the plus side, the team showed just how competitive it will be, and that paves the way for a promising season ahead.

“Who wouldn’t be disappointed when you’re staring down the barrel of victory at Bathurst – we were all shattered. On the plus side though, apart from that freak occurrence, the car was bullet-proof. We were comfortably the fastest, tyre wear was negligible, and we were all capable of extracting pace from the car, it was a real delight to drive. For us, the focus turns to the Australian GT Trophy category this year where Justin and I will be looking for victory, and I think based on our Bathurst performance, that’s a real possibility!”