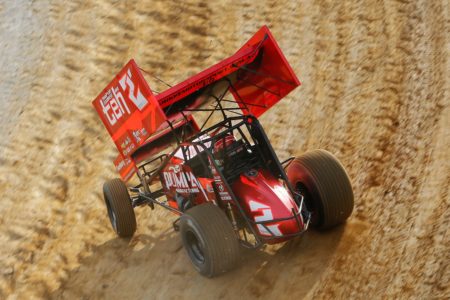 To say that the Krikke Motorsport team and their driver Kerry Madsen had a consistent 2019-20 season campaign would be quite the understatement.

In what was the second season together for the duo, they managed to impressively finish 15 of the 19 feature races on the podium with three of the being wins, along with being the only team to record back-to-back WSS round wins.

Like it has been for past three seasons, the Krikke Motorsport started their 2019-20 season campaign in December of last year with the Western Australian 410 Sprintcar Title at the Perth Motorplex and it resulted in an impressive victory. For the team, this was their third WA Title win in a row with the past two with Madsen and the one before that with their previous driver Jamie Veal.

Over the Christmas-New Year period, the team’s WSS Championship began with the hectic Speedweek Series. Madsen was a model of consistency throughout the bulk of the Speedweek campaign with a string of podium finishes but it came to a crashing end in the fifth round at Premier Speedway while fighting for the lead with James McFadden. This was one of only a few DNFs for the team throughout the season.

Following the Speedweek Series instalment of the WSS Championship, Madsen sat second in the overall point standings behind McFadden. For the Sunshine Swing of the WSS Championship in Queensland, Madsen continued the team’s consistent run of podium finishes. Bad luck would see the team’s lowest finish came at the Hi-Tec Oils Speedway round, where he was running in podium spot until a flat tyre in the closing laps spoiled his chances and he finished in 10th.

After the Sunshine Swing of the WSS Championship, there were numerous rain outs throughout the second half of the month of January. The two-night Ultimate Speedway Nationals at Sydney’s Valvoline Raceway (NSW) was rained out and then in the lead up to the Grand Annual Classic weekend, both the feature race for the President’s Cup at Avalon Raceway (Vic) and the King’s Challenge at Borderline Speedway (SA) were rained out.

This season’s Grand Annual Classic run at Warrnambool’s Premier Speedway was a solid one for Madsen and the team. After finishing second in the preliminary feature race on his qualifying night after battling with Marcus Dumesny for the win for the entire race, Madsen went on to finish Sunday night’s feature race in third place on the podium (the second season in a row) after he had impressively charged from position nine in the field.
The team then ventured over to Tasmania to contest the Australian Championship at Latrobe Speedway. In an event that was hindered by wet weather, Madsen ended up third in the Australian Championship deciding feature race. It’s fair to say that had it not been for two caution periods in the latter stages of the race, the result might have been a lot different.

Madsen and the team travelled back to team’s home state of Western Australia for the remaining four WSS Championship rounds and the Krikke Boys Shootout. Following a clean weekend sweep of the Esperance Speedway and Bunbury Speedway rounds, Madsen put himself right in contention for the WSS Championship. Showing solid speed in the following weekend’s final two rounds at Perth Motorplex, luck didn’t favour the team and they were unable to deny McFadden of the WSS Championship after taking the challenge right up to the final feature race of the series. At the WSS presentation dinner the following evening, new crew chief Matt Cochrane was awarded ‘Crew Chief of the Year’ voted on by his peers. The team also picked up most ‘Pole Shootout Wins’ (6) and the prestigious ‘Best Presented Car and Crew’ award capping was what was another great season on the WSS trail.

Concluding their 2019-20 season campaign with the annual Krikke Boys Shootout at the team’s home track of Bunbury Speedway, they were eager to finish it on a winning note. Despite being the fastest car throughout the event, Madsen was leading the feature race up until a lap-13 incident between two lapped cars took Madsen out of the running with a flat tyre.

The Krikke Motorsport team and Madsen finished with a 2.3 average feature-race finishing position. They also had a 78.9% podium finishing rate and an 84.2% finishing rate.

The Krikke Motorsport team would like to thank all their partners for making the 2019-20 season another great one.

Krikke Motorsport merchandise, along with a limited range of discounted merchandise from previous seasons, is available via the team’s online store. To view and purchase your merchandise, click the following link: www.krikkemotorsport.store