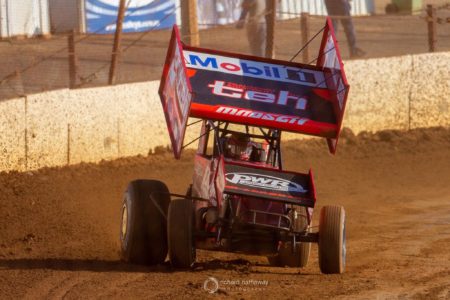 Madsen took out last Friday night’s 11th round at Esperance Speedway and then backed up that form by taking out the following night’s 12th round at the team’s home track of Bunbury Speedway in what was a perfect start to the Western Swing of the World Series Championship.

After leading every feature race lap over the past two rounds by virtue of qualifying on pole position on both occasions, Madsen certainly had to work hard for both of his wins. He came under fire from Brooke Tatnell in the latter stages at the Esperance Speedway round and then from WSS Championship leader McFadden at the Bunbury Speedway round. On both occasions, Madsen kept his nerve and went on to take out a clean sweep of the weekend.

Since winning the Western Australian Title at the Perth Motorplex at the beginning of the season in December of last year, Madsen and the team have been frustratingly winless despite a long list of minor podium finishes which has included numerous narrow losses. However, their winless streak came to an end over the weekend in the best possible fashion by taking out a pair of round wins.

By virtue of the weekend’s WSS Championship round clean sweep, Madsen and the team have now closed the point standings gap between themselves and leader McFadden to a narrow 26 points.

“It was a great feeling to get back into victory lane, not only for me but for the entire team and all of their efforts,” expressed the WA # 2 Transport Equipment Hire / Pumpa Manufacturing supported Maxim racer.

“Up until now in the World Series Championship, I’ve just been taking each round as it comes and trying not to get too far ahead of myself, but heading into this weekend’s championship final rounds and with the points so close, it’s now or never and it’s going to be really interesting to see who comes out on top.”

The 2019-20 season range of Krikke Motorsport merchandise, along with a limited range of discounted merchandise from last season, is available via the team’s online store. To view and purchase your merchandise, click the following link: www.krikkemotorsport.store