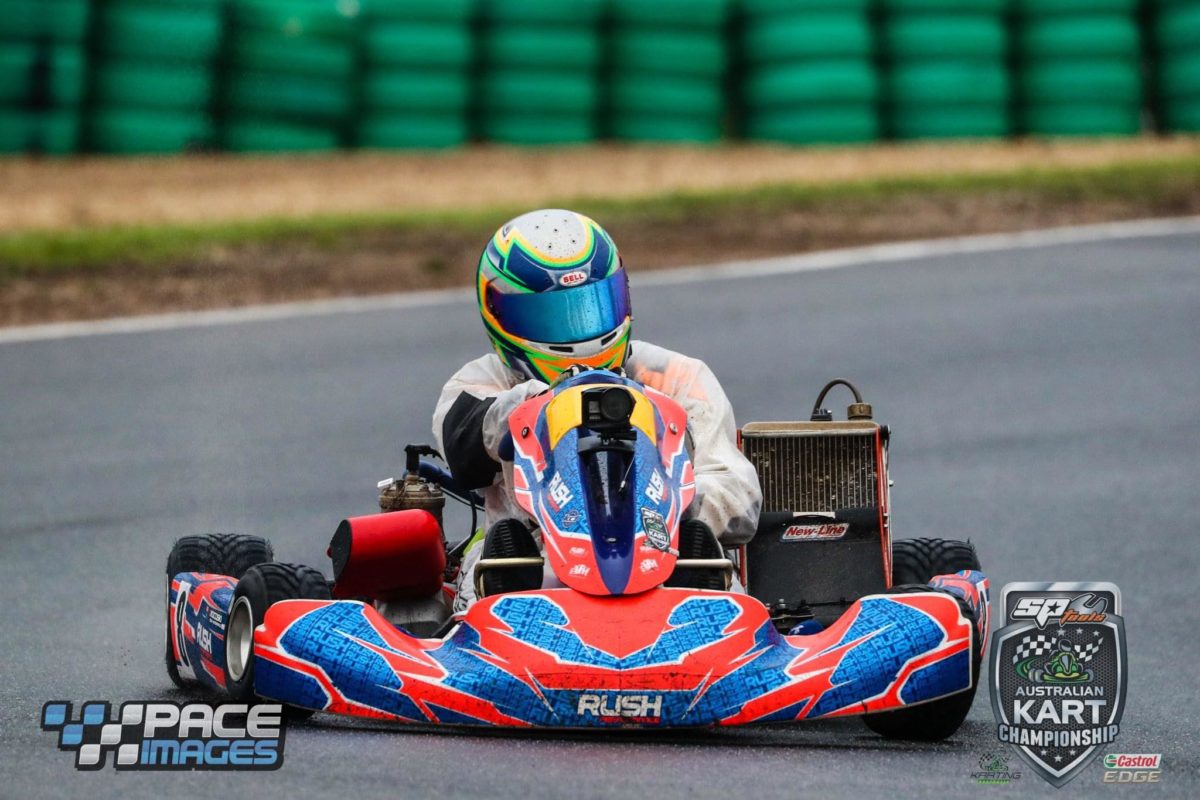 Jett Kocoski headed down the Hume Freeway to take place in the third round of the SP Tools Australian Kart Championship at the Eastern Lions Kart Club. Kocoski running under the Rush Performance banner was taking on the near fifty kart field in KA2 Junior. Jett was looking to challenge the front of the field as much as possible and put himself into championship calculations.

Kocoski used Friday practice to get the most out of himself and his package and he head out for qualifying seventh overall. The Haak Race Engines powered and sponsored entry was immediately in the top ten and looking to move up the field. Jett was able to move up the field into the top five and was putting in smooth and calculated laps. Kocoski was able to put himself in fifth position overall in an incredible result.

The rain came overnight and the opening heat was going to be undertaken in wet conditions. The team were ready to go for the opening heat when they noticed a leak coming RHR tyre was leaking. The team filled the tyre with pressure and sent the driver on his way. The Major Property Solutions backed entry settled into the top five and looking to save as much tyre life as possible while trying to keep it in the front group. Kocoski was able to cross the line in fifth position overall in a great start!

Kocoski second heat was on a drying track where the team deciding to put on slick tyres. The Rush Performance driver got an excellent start staying in the top five and challenge on the back of the top three. Jett was putting in smooth and fast laps to run in the top five and grab more valuable points. Kocoski was able to come home in a strong fourth place overall, putting him in a good position for starting positions.

The third heat was once again under changing wet conditions and Kocoski was starting out of position three. The Haak Race Engines backed entry dropped down to position six off the start and was once again looking to save tyres. Jett was able to make his way into the top five as the race went on and was pushing the back of the four drivers ahead of him. Kocoski was able to come home in fifth spot overall and gain more valuable points.

Jett was ready to go for the final heat and the team were looking to have a strong result as their wets were in good conditions. The Major Property Solutions backed entry was in the top three off the start and battling for position. Kocoski dropped as low as fourth but was quickly backed to third and was closing in on second place overall in the back end of the race. Jett was able to make the move for second place and crossed the line for his highest finish of the weekend. An unfortunate drop down penalty put Kocoski down to fourth overall but had him still off pole position for the final.

Kocoski was off pole position for the final and ready to give it his all. The Rush Performance backed entry led the early laps before dropping to position two overall. Jett didn’t quite have the pace to go with the race leader but sat in second spot for the first half of the race. Kocoski continued to fight on the edge of the podium mid race and was able to come away with an incredible third place overall!

Kocoski was able to spray some champagne to finish the weekend much to the delight of his team and supporters. Jett will be back at the fourth round of the SP Tools Australian Kart Championship at the Emerald Kart Club.