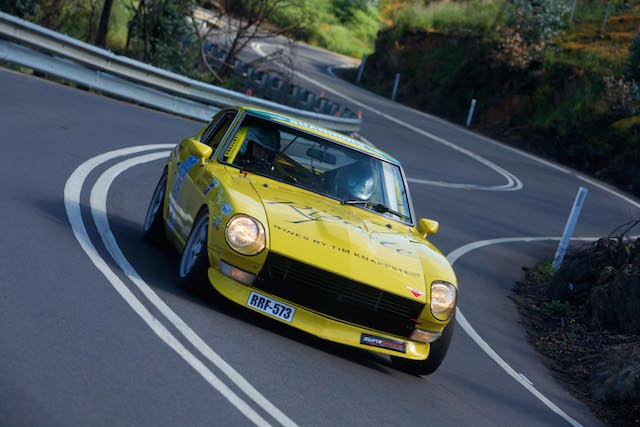 The award-winning vigneron and owner of Riposte Wines will share his early classic 1969 Datsun 240Z with his son Nick at the event – each having a drive throughout the day.

At 3.5km, the new Eden Valley Hillclimb is the longest event of its type in South Australia. The event will be held on a closed section of Sedan Hill Road (Stott Highway) between Sedan and Keyneton, just east of the Barossa.

“We’ve been driving on the same tracks for decades here in Adelaide, so it’s refreshing to have a new option in the Eden Valley Hillclimb,” says Knappstein, who started his successful Adelaide Hills wine company ten years ago.

Working with Adelaide’s own Oscar Fiorinotto of Supashock, Knappstein has employed advanced technology to optimise the handling of his classic Datsun. “The
work we’ve done on the Zed’s suspension makes it ideal for competition on South Australian roads, some of which are rougher than many race circuit or hillclimb tracks.”

Pursuing his other life passion, Knappstein campaigns the Datsun as much as his demanding schedule allows. In the last three years he has won 21 tarmac rally stages and contested a number of local supersprint events. This year, he and his wife – and navigator – Dale, finished third outright at Classic Adelaide and contested Targa High Country in Victoria.

“Normal hillclimbs don’t really interest me as they’re too short, but being 3.5km Eden Valley is really akin to a short tarmac rally stage,” says Knappstein, who says he is keen to be competitive on the day but still have a good time with his son and other fellow rev heads.

The Eden Valley Hillclimb will be Nick Knappstein’s first ever road going motorsport event. Nick, who is brand manager for the family business, has only managed to pry the Datsun from his father’s grip a few times to contest some local supersprint events.

Complementing the potent engine package is a close ratio gearbox with a triple plate clutch and a KAAZ limited slip differential.

For the event, Knappstein will add his bespoke circuit sprint aero kit to the car, which encompasses a rear wing and splitters.