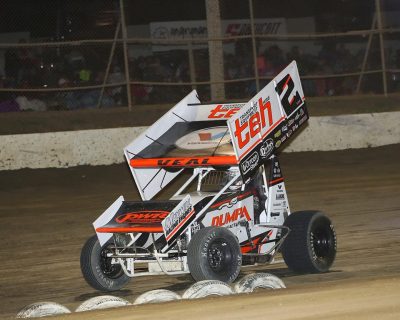 In what was the duo’s third feature-race win of the season, which includes the Western Australian Title and the Australian Championship preliminary feature race, Veal, steering the WA # 2 Transport Equipment Hire / Pumpa Manufacturing supported Maxim, impressively qualified on pole position and then went on to dominate the entire 30-lap feature-race journey.

With a previous season best WSS round finish of second in round five at Warrnambool’s Premier Speedway, Veal, the 2016 WSS Champion, was rapt to get into victory lane, not only for himself but the entire Krikke Motorsport team.

“It’s been a tough season for us so far, but we have never been lacking car speed and not once have we dropped our heads and all of our continued hard work and persistence is paying off,” expressed a jubilant Veal, who now sits second (2244) in the WSS Championship point standings behind leader James McFadden (2525).

“This win is a big relief for our whole team and hopefully this is the beginning of a strong finish to the season as we chase to wrestle the World Series point standings lead from James (McFadden).”

The previous night’s eighth WSS Championship round at Gulf Western & Independent Oils Raceway was a tough night for Veal. He crashed out in his second heat race in the extremely tough track conditions, but the team managed to hastily repair the car and then had to qualify for the feature race via the B main. In the feature race, he went on to finish in ninth place.

Veal and the team remain in Tasmania for this Saturday night’s 10th WSS round at Hobart Solo Speedway.