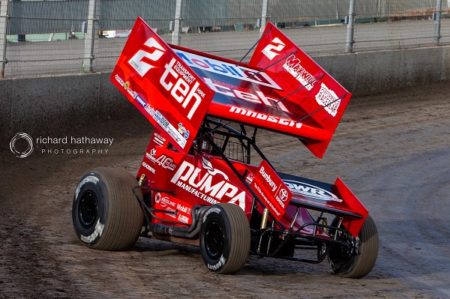 Following the recent cancellation of this season’s World Series Sprintcar Championship, the Krikke Motorsport team has had a change in their 2020-21 season plans and announcing Dayne Kingshott as their new driver.

With the international and state borders currently closed due to the coronavirus outbreak – and with the opening of them not yet known – it’s unlikely and unfortunate that the Krikke Motorsport team driver, Kerry Madsen, is going to be able to return to Australia to compete this summer.

As a result of Madsen being unable to run the upcoming season, the Krikke Motorsport team has made the decision to concentrate on the domestic season in their home state of Western Australia with the SEG Series and signed up 2019 Australian Speedcar Champion and good family friend Dayne Kingshott as their driver.

“Without a World Series crown to chase and the likelihood of any blue-ribbon events happening on the eastern seaboard this summer engaging Dayne and racing domestically in Western Australia seemed like the obvious choice,” stated Krikke Motorsport team manager Ryan Krikke.

“To be honest, not racing this season was never really going to be an option. I’m thrilled and excited to be able to offer Dayne the opportunity to race for us.”

Apart from the Krikke and Kingshott families having a long-standing friendship over three decades, which included the Krikke family’s car dealerships, Bunbury Toyota and Bunbury Subaru, sponsoring Dayne as a teenager in Junior Sedans through to the heights of Speedcars, Kingshott, who is also from Bunbury, is good friends with current Krikke Motorsport crew chief Matt Cochrane.

“Dayne and Matt go way back, as Matt was the crew chief on Dayne’s Speedcars before coming to Krikke Motorsport team and I’ve known Dayne and his family for probably 30 years, so the chemistry is there already,” Krikke enthused.

“We are not going to be putting any pressure on Dayne whatsoever and I’m really excited to see him develop and see where this goes. His ability in a Speedcar is well known, we just need to transfer some of that across to the Sprintcar and he’ll be fine.”

Krikke mentioned that he hasn’t totally ruled out Madsen driving for the Krikke Motorsport team during the season ahead.

“If the borders open up and restrictions begin to ease and Kerry can return this season to Australia then we will try and chase the money events, if there is any with him and then Dayne will resume as the driver once Kerry returns to America,” he said.

“Winning a World Series title with Kerry is still our long-term goal but that can’t happen this season, so we’ll go have some fun and try and help Dayne and his speedway racing career along a bit.

“This may become the norm for us, if Dayne can develop into what we need from him this may be our programme going forward, he does some early shows, Kerry does the World Series and Dayne finishes the WA season out for us. It’s as much about developing Dayne as it is anything. I would love to think we are building on something for the future.”

Kingshott, who recently announced that he would be stepping away from running his family-owned Speedcar, he is extremely excited about the opportunity with the Krikke Motorsport team.

“I can’t wait to get behind the wheel of the Krikke Motorsport car and see how we go as a team,” the 31-year-old racer said.

“During my career, I have had a little bit of Sprintcar experience with some other teams, but this is the first full-time opportunity I have received, so I’m looking to grab it with both hands and become competitive as quickly as possible.”

The first 2020-21 season outing for the Krikke Motorsport and Kingshott duo is set to be on the Saturday night of October 31 for what will be the opening SEG Series round at the Perth Motorplex.