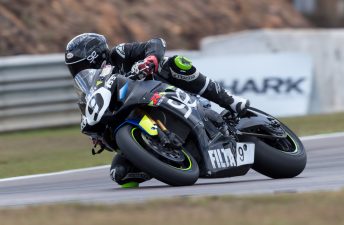 The 2017 Yamaha Motor Finance Australian Superbike Championship presented by Motul Pirelli (ASBK) is the most prosperous to date, boasting near capacity grids, televised and live streamed racing, large manufacturer support, strong attendance numbers and incredibly talented competition. As a result of this growth, the ASBK has grown internationally.

The ASBK paddock is an international melting pot of riders and team personnel from the United Kingdom, Asia, the United States of America and New Zealand to name a few. Shortly after a highly successful Round 4 at Hidden Valley Raceway in Darwin, we caught up with Kiwi competitors of the ASBK – Yamaha Motorcycle Insurance (YMI) Superbike rider Sloan Frost and Motul Supersport class competitor, Damon Rees.

The highly decorated Sloan Frost has been racing for years at top level all over the world and the New Zealand Superbike champion is well regarded by many.

Q: Sloan, where exactly is home for you? And what is it like to be constantly traveling ‘across the ditch’ to go racing?

A: “I am based in the capital city, Wellington, which is at the very bottom of the north island of New Zealand (NZ) which is handy as we have an international airport. There is something special about racing in Australia, the whole process from getting on a plane and racing on foreign tracks is still exciting, even though I probably have more track time in Oz than at home!

Q: When and how did you become involved in racing?

A: “I was quite a well-established motocross rider from a really early age and made the jump to road race fairly late, as I was the only one in the family that was interested in bikes – a firm passion of mine since I was three.

Q: How do the Aussie guys and gals treat a Kiwi in the paddock? Is there a friendly ‘ANZAC’ type rivalry? Or is all love lost when the flag drops?

A: “Theres alway’s a bit of sting between the Aussies and the Kiwi’s, the rivalry might escalate as my results hopefully improve! I haven’t quite reached my potential when competing in Australia for one reason or another, but I am determined to change that. My confidence has improved and hopefully I can start challenging the guys in front very soon!

Q: How would you describe the Superbike scene in NZ for those in Australia that might not be familiar with it?

A: “Considering our population in NZ, we have a great motorcycle race scene. Motorcycling New Zealand (MNZ) have been working hard to follow the success of the ASBK and we have good distributor support from the major manufacturers. The Kiwi Superbike scene has been rejuvenated in the last year or so, and we have seen fantastic riders stepping up from the Supersport (600cc) class and also swapping over from other disciplines as motocross. There are usually ten or so riders that could potentially win any given race. Damon Rees, Shane Richardson and Daniel Mettam are a few of the young names that are riding really well, with plenty of younger guys that are showing potential.

Q: What do you do when you are not racing? Or in the Off Season?

A: “I think the weakest part of the NZ scene is the fact that our racing season is so condensed due to our climate, usually run over about six weeks a year. That is why I always ride in Australia, because our ‘off season’ nearly goes all year!” Frost quipped. “It would be great to have some Australian riders come over for our race season, as it’s all done before the Australian season starts – And is a great way to warm up!

“I have an air conditioning business that keeps me exceptionally busy, three small children, my wife Lexxie, a 250cc Shifter Kart I race, motocross and a jet ski, that all get a fair bit of attention. I am also helping Suzuki NZ to prepare the Gixxer 150 Cup in NZ. I build all my own bikes in NZ and Australia so there is not really a second of the day that I am not flat out busy!

Q: You have had some pretty decent races this year, how would you say your season is progressing so far? How is the bike going?

A: “My bike is amazing. The new GSXR-1000 is so much better than the previous model, it has made my life easier for sure. The only downside is that because the bike is so new we have not had access to many parts. Bits like the ECU need development, which we simply don’t have time to do as the bike sits in the van at the airport between meetings. In fact, I haven’t even had the fuelling tuned on the bike, so essentially the bike is stock. It still has all the emission control system and all we have done is just chucked on a Yoshi exhaust! We have the Morgan Park (QLD) test coming up which is exciting, and if I can build on what we had in Darwin, I know I will do well.

Q: What are you most looking forward to for the remainder of the ASBK season?

A: “I really like Sydney Motor Sport Park and Phillip Island, so I look forward to those rounds the most. Those tracks are difficult, and require a lot of corner speed. That’s where the Australian riders excel and where I need to lift my game.

Q: What has been the highlight for you personally in 2017?

A: “Darwin. I loved Darwin! Well, actually it was terrifying because I was trying to get up to speed and was 20 seconds off the pace at the start. I was basically a moving road block. The guys were all pretty good though and I got out of their way. But seriously – Darwin was cool. It was a family affair with my father in law spinning spanners alongside my mum and dad. It all felt like a holiday! There was a great vibe around town, the track was smooth, fast and it was a new place for me.

A: “I have only done two rounds of the ASBK so far this season, but the most memorable experience I have had this year was three crashes in one day at Winton – before we found a broken shim in the old forks we were running!”

The Rees family name has been bounced around road race paddocks for two generations now, both in New Zealand and Australia. First with Tony Rees and his numerous successes on a Superbike, and now with his son, Damon who is dominating (and won) the 2017 Kiwi Supersport Championship. We caught up with the rising talent from Aotearoa.

Q: Damon, where is home for you? When did you become involved in racing? And, what is it like to be constantly traveling?

A: “Home for me is Whakatane in the North Island on the idyllic Bay of Plenty. Travelling to Australia has become the norm for Dad (Tony Rees) and myself, as he has raced in Australia for most of his career.

“I have ridden motorcycles since I was five and got into road racing back in 2004 when I was 19, when Dad asked me to be his mechanic. After that, I was hooked to tarmac.”

Q: How does a Kiwi go in an Aussie paddock?

A: “Racing in Australia has been a buzz. Everyone has been great and we are all there for the same reason – to race and make great memories along the way. When the lights go green on the grid, we all want to win and there is a “take no prisoners” vibe!”

Q: How would you describe the Supersport scene in NZ?

A: “Racing in NZ is fairly similar to Australia, and is similar numbers in the classes. The top ten riders in each class are super-fast, so you can’t have an ‘off weekend’ or you’ll be at the back!”

Q: What do you do when you are not racing? Or in the Off Season?

A: “This year, I won’t really have an off season, because once it’s all wrapped up in Oz, I’ll be straight into our season at home. I am sure it will definitely help me with the season having all the bike and track time in Australia. At home, its winter – no one rides until September/October. When I am not racing, I work as a mechanic for Mum and Dad at their Honda Dealership; Tony Rees Motorcycles, or riding a motocross bike for training.”

Q: You have had some pretty decent races this year, how would you say your season is progressing so far? How is the bike going?

A: “We were lucky enough to get hold of Giuseppe Scarcella’s old CBR600RR that had a blown engine. We found a donor motor at a wreckers’ in Sydney, fitted it and went racing at Round 2 Wakefield Park Raceway! We are lucky enough to store the bike and gear at Bikebiz in Parramatta throughout the ASBK season.

“The 2017 ASBK season has had some ups and downs for me personally, but I feel we are getting better adjusting to all the new tracks, and my bike is running really well.”

Q: What are you most looking forward to for the remainder of this season?

A: “I look forward to every round as they come because they are all a new challenge for me, but mostly, I am looking forward to Phillip Island. The Island is an amazing track, I can’t wait to have my first ride there.”

Q: What has been the highlight of 2017 ASBK for you personally?

A: “The highlight so far has been getting on the podium for Round 4 in Darwin, and I am looking forward to getting up there again next round!”

A: “So far? – Winning the 2017 New Zealand Supersport Championship!”