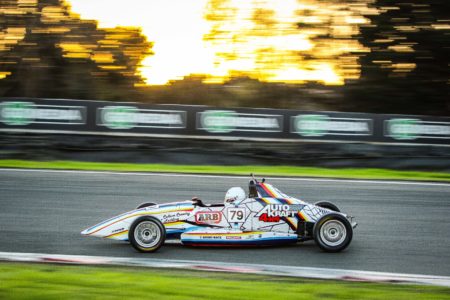 Formula Ford’s most prestigious international event is to be contested by a leading New Zealander category contender – and supporters here will be able to tune into his progress.

Callum Crawley, 19, from the Manawatu town of Feilding, is off to England to contest the Formula Ford Festival, competing in a Spectrum – the make he represents in the New Zealand championship.

This October 26-27 meeting at Brands Hatch is one of the largest Formula Ford events on the calendar. Drivers from all over the world are drawn to etch their name onto the Neil Shanahan Trophy and into the pages of Festival history.

Thought to be the only Kiwi competing this year, Crawley is running for Kevin Mills Racing, a multi-championship winning UK team.

“Kevin Mills Racing supports Spectrum in the UK and I will be one of four drivers.

“My team-mates all race in the UK so I will be looking to learn from them.”

Contesting a truly historic event which has had a variety of motorsport legends appear on its grid presents an exciting adjunct to a national activity that is going well.
Crawley’s class involvement only began last summer as a new challenge, subsequent to winning the previous year’s national Formula First championship.

He has earned respect – and plenty of attention – for his pace, versatility and tenacity at the wheel of a car designed and built by Borland Racing Developments in Melbourne, Australia.

The opportunity to contest the Festival came about from BRD principal Michael Borland being impressed by Crawley’s 2018-2019 national campaign outcome.

He finished third in championship and was named Rookie of the Year, having accrued three wins and five podiums over the five-round series.

“Michael came across to help us with setting up the car and then returned for three of the race weekends. He’s a great guy and I really appreciate the support he has given me.”

The Festival’s status as a pinnacle international trial for this extremely popular international single seater racing class cannot be ignored.

“Going to a new track and an entirely different atmosphere on the other side of the world is not going to be easy.”

Racing is on the Kent venue’s famed ‘Indy’ layout delivers a variety of corners and characteristic elevation changes. The event’s reputation for uncompromised action with cars often jostling on the limit just millimetres apart is also on his mind. A stern challenge, yet one he’s eager to take on.

“I’m truly looking forward to taking it to the best the Festival has to offer. It’s an amazing opportunity. I cannot wait to have a go.”

What makes it all the more exciting is that 2019 is the first year the show will be live streamed.

“So my family, friends and fans back home can check out my progress – though, of course, with the time difference it’ll be late-night weekend viewing at home.”

The Festival has been held annually since 1972 and has been hosted at its spiritual home of Brands Hatch since 1976.

It remorselessly sifts out the best of a 70-plus field chasing the chance to reach the winner-takes-all showdown.

“The format gives us plenty of track time and is a strategic challenge to make it through the heats, semis and into the final,” Crawley notes.

A new addition is a ‘last chance’ heat wrapping up the first day in which the quickest 30 drivers who failed to get through heats are given extra opportunity to make the semis. That leads to another ‘last chance’ race, in which six grid places are up for grabs in the grand final contested by 30.

Crawley’s road to Formula Ford, the second-highest national single seater category below Toyota Racing Series, began with competitive karting when he was 10.

After a few seasons in the cadet class, he then put racing aside to concentrate on school until, at age 14, he was tempted by a competition staged on his home track, Manfeild Circuit Chris Amon.

His bid to win the Speedsport Scholarship for Formula First was unsuccessful, yet he was so inspired he leased a car from contest organiser Sabre Motorsport to contest the 2016-2017 championship, impressively finishing sixth.

For the next season his family purchased their own car, which he, his father, Tim, and some friends then ran – the end result being a national title. No mean feat for a competitive class renowned for extremely close racing.

Success has also come since he joined Formula Ford in 2018. He is fourth in the current championship, with the next round at Manfeild Circuit Chris Amon on October 19-20. It’s a busy weekend; as soon the racing ends he’s out to the airport and en route to England.

Details about the streaming will be posted on the British Racing and Sports Car Club (BRSCC.co.uk) and Formula Ford (ff1600website.com) websites.