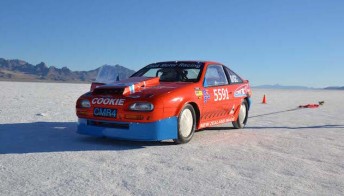 MEDIA RELEASE: The CMR Bonneville team has successfully broken four landspeed records in the last month on the salt flats at Bonneville, Utah in the United States of America in two cars; a naturally aspirated Nissan Coupe dubbed “Cookie” and a streamliner called “Wairua”.

Cookie holds a total of four different landspeed records; something never achieved by any Kiwi before, making the CMR Bonneville team go down in the history books.

Cookie boasts a 300 horsepower engine built by a team of dedicated and passionate Kiwis in a workshop near Clevedon. In 2011 Cookie broke the naturally aspirated production class record at 174.5mph.

Reg Cook, owner of the team, said: “We are absolutely stoked to brake this many records. It was certainly a challenge for the team but they made it happen and I’m so proud of them and their ‘Kiwi-can-do’ attitude.”

Meanwhile, Wairua, a, custom built streamliner designed, engineered and built in a big farm shed in Clevedon with a Volkswagen 2,000cc turbo Diesel engine, broke the 2,000cc Diesel Streamliner record by 41mph lifting it to 188mph yesterday on the three mile course with ex-pat kiwi Steve Davies at the wheel.

Later in the day Cook piloted the streamliner on the course and continued for a fourth running mile recording a top flying mile speed of 210mph, and max speed 219mph. With a storm inbound organisers arranged back-up runs three hours later and the car mirrored the earlier run to set 210mph record, 22mph over their earlier record.

This success followed some mechanical problems last month at Bonneville and the team had to fly back to New Zealand while repairs were made in the USA in Utah. The team then flew back last week to make more attempts on the salt flats.

“This was truly a team effort and hope that by never giving up, we’re inspiring other Kiwis to get involved, follow their dreams, and never give up,” said Cook.

While the CMR Bonneville team is made up of over 20 people in New Zealand, only eight travelled to the USA on this journey.