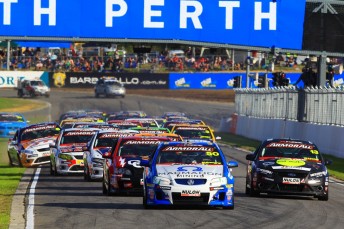 Barry raced alongside Kris Walton and Jeremy Gray recently at Pukekohe, NZ and is looking forward to the re-match on their home turf.

“It’s going to be a bit of a step up, but I am comfortable racing around Kris and Jeremy at home so I should fit in ok.  Having 32 Utes in the race is going to be a huge challenge for me, as Qualifying is going to be so important. My goal for the weekend is to finish all the races and finish in the top half of the field,” explained Barry.

Barry will steer Jack Elsegood’s Ford, which will be run by Peters Motorsport over the weekend, and won’t have a shortage of advice with teammates Wayne Wakefield and Kris Walton both sitting on equal third in the Series.

Series leader David Sieders will be looking for back-to-back Round wins in both the Series and at Perth. Having come off a win at the Clipsal 500, the New South Welshman is leading the ARMOR ALL Driver’s Championship.

“I think I felt more pressure last year as I’d never won there in a Ute before, so it was good to get that monkey off my back, now that I’ve done it I know I can hopefully do it again and I will be a bit more relaxed. It’s one of those tracks where you’ve got to be big under brakes and ultra-smooth, and at the same time make sure you get an edge and enjoy the four turns that it has,” said Sieders.

Thirsty Camel Racing’s Craig Dontas, currently running second in the Series, is starved for a Race win. He has not secured one since Winton 2012, and after qualifying third in Perth last year is feeling confident coming into the Round.

“I am feeling very confident, we’ve had two very successful test days and we’re in a good space and will ride the wave of confidence for sure. The track is technical and every year it changes, it’s one of those tracks, if you have confidence in the car and brake pedal you’ll go quite well there and we’re feeling confident under brakes,” said Dontas.

Two-time V8 Ute Champion Ryal Harris will be out for a win in his All Purpose Pest Ford, with three race wins and three podiums under his belt, he is yet to secure the Round.

“Most definitely we’re out to win. We had a test day the other day, in a new car so everyone is excited. I’ve never raced in a new car before so I’m really looking forward to it. We’re on the back foot chasing points so my main goal is getting back on track and getting into the top five in points, if the pace is there then we’ll be going for it from the start of the weekend,” explained Harris.

Local driver Rhys McNally will also be out in force, claiming third at his home round last year and looking for his first podium for the year.

“Obviously competition this year is pretty tight, it won’t be an easy run but obviously I won’t have to worry about learning the track and we’ll give it all we’ve got,” said McNally.

The drivers will take to the track for two practice sessions on Friday, before finishing off the day with Qualifying. Race 2 and Race 3 will be televised on Network Seven.