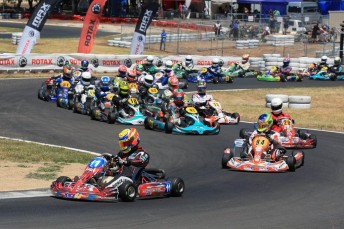 Aucklander Daniel Kinsman and Wellington sisters Madeline and Ashleigh Stewart are back in Australia this weekend contesting the sixth round of the 2013/14 Rotax Max Challenge Pro Tour at Warwick in Queensland.

Kinsman, the 2013 New Zealand Rotax Max Light champion, has been a regular in the top six at the rounds of the Australian series he has competed at this and last year and last month came back from a dnf in the Saturday Final at the fifth round at Geelong in Victoria to finish fourth in the Sunday one.

Because he has only competed at rounds which do not clash with his racing commitments at home, however, he is currently ranked 14th in the class points standings with just the one series round to go.

The Stewart sisters are in a similar position in the Junior Max Trophy class, with Madeline ranked 15th and Ashleigh 16th despite the pair regularly finishing in the top ten at the rounds they have competed at.

Warwick, the venue for this weekend’s meeting, is in inland Queensland about an hour’s drive due south of Toowoomba. The final round of the 2013/14 season series will be held at Coffs Harbour on the Central New South Wales coast next month.