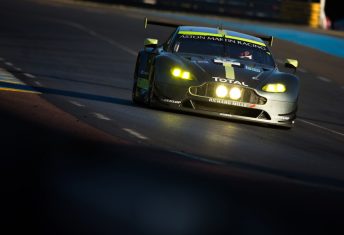 While Kiwi drivers took to the top of the podium at the 85th running of the 24 Hours of Le Mans, it was a New Zealand made product that played an integral part in Aston Martin Racing’s win in the GTE Pro class. Wellington based Racetech NZ had their locally manufactured seats in all three works Aston Martins as well as two customer Aston’s and the two Porsche works 911 RSR’s.

“We’ve been working with Aston Martin Racing for some time now, “commented David Black, Racetech CEO. “We supplied our first seat to AMR back in 2015 but have actually been working with Prodrive since 2005 on WRC cars and supplied Subaru World Rally Team in 2006 and 2008 plus other projects more recently such as the Subaru driven by Mark Higgins around the Isle of Mann.”

Aston Martin Racing won the GTE Pro class at Le Mans this year in dramatic style, after Jonny Adam (GB) snatched the lead on the final lap of the race. Teaming up with Darren Turner (GB) and Daniel Serra (BR), the trio and their Aston Martin V8 Vantage GTE was always in the hunt for victory right until the very end. With just over 45 minutes left on the clock, Adam pitted at the same time as the leading #63 Corvette for a final fuel stop. With both cars exiting the pit lane together – with Adam in second – it was inevitable that he would have to make the pass while on track. This happened on the penultimate lap when the Corvette ran wide at the second Mulsanne corner and a slow puncture halted their progress and ensured the victory for the #97 Aston Martin.

“I believe AMR took a very serious look at the safety in their cars following the death of Allan Simonsen at Le Mans in 2013,” said Black. “Also, the FIA were looking to Mandate 8862-2009 standard seats in all GT categories.

“From an engineering point of view the Racetech seat has advantages because of the fixing at shoulder level to the roll cage/chassis. Several manufacturers are looking at this Racetech feature now because their floors are not strong enough to take the huge loads generated in a major lateral impact. This was also one of the reasons for AMR using our seat along with the better driver feel and comfort including ducted cooling into the seat.

“We are also very proud of the fact that our seats, produced in New Zealand are utilised by 23 of 32 British Touring Car Championship cars, 20 of 26 Australia Supercars as well as the reigning World Champion in WRX with Mattias Ekstrom and his EKS Audi team.

Aston Martin Racing will return to the FIA World Endurance Championship for the 6 Hours of Nürburgring on Sunday 16 July.