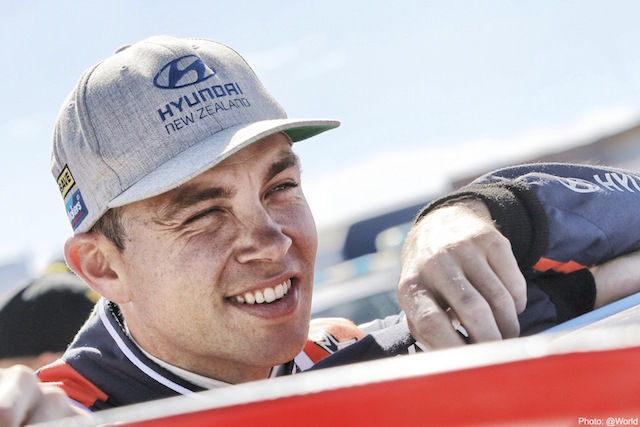 MEDIA RELEASE: Kiwi motorsport star Hayden Paddon, New Zealand’s most successful rally driver, is backed all the way by New Zealand-owned businesses as he prepares for his biggest season of international rally competition.

Paddon, originally from Geraldine, and his long-time co-driver John Kennard, from Blenheim, return to the FIA World Rally Championship with Hyundai Motorsport for a full 14-rally season in 2016, having confirmed a three-year contract with the team toward the end of the 2015 season.

The New Zealand management company which oversees Paddon and Kennard’s world rallying exploits, Hayden Paddon RallySport Global (HPRG) Ltd, has confirmed partnerships with Hyundai New Zealand and Pak’nSave, as well as increased support from Z Energy and the support of associate sponsors Scott Sports and All About Signs in Timaru.

The commercial partnerships with New Zealand-owned businesses emphasise the strong connections Paddon maintains with New Zealand, and are a vital and valued contribution to his 2016 world rally campaign where he aims to build on the many successes of last year including a career-best second place result in Sardinia.

Hyundai New Zealand and their nationwide dealer network have backed Paddon since 2014.

“This is our third year working together with Hyundai New Zealand and their nationwide dealer network,” says Paddon. “They form a huge part of our WRC campaign as John and I continue to strive towards our ultimate goal of being world champions.”

Consistently among the top three new vehicle sales in New Zealand, Hyundai New Zealand – a 100 per cent Kiwi- owned company – has a vision and motivation which is matched by Paddon and Kennard’s ambition to be the best.

Paddon says: “To represent one of the fastest growing car manufacturers in the world, and a brand I am very passionate about is an honour. Working with Hyundai New Zealand is hugely enjoyable – we’re always keen to encourage more Kiwis to buy a Hyundai! We also have some other exciting New Zealand-based projects with Hyundai New Zealand on the horizon and look forward to sharing more about these soon.”

Now in their fourth year as key partners with HPRG, Pak’nSave has been pivotal in helping Paddon and the team reach their current position with a full-time contract in the World Rally Championship.

“Our partnership with Pak’nSave continues to grow,” Paddon says. “It’s great to continue with Pak’nSave which has formed an important part of our team over recent years. It’s a great example of Kiwis helping Kiwis!”

Also in their fourth year together and now with increased involvement, Z Energy will continue to help fuel Paddon’s drive and aspirations to be the world rally champion. The partnership between Z Energy and HPRG promises to deliver some exciting projects in the future.

Paddon says: “Z Energy, along with our other partners, are among New Zealand’s most trusted and thriving brands. The values and ambitions of Z to be the best aligns with our dreams, and it’s an honour to be involved with a company that is dedicated to Kiwis and providing the best service.”

Timaru-based HPRG director Peter Swaney says: “We have always had great support from corporates and shareholders involved in HPRG and it’s fantastic to see this support continue – and increase – as we commence the 2016 season. I think it’s a real testament to the brand that we have built around Hayden over a long period of time to have three of New Zealand’s biggest and customer-focused companies partnering us.”

The team at HPRG is also in the final planning stages of an exciting scheme to be rolled out throughout the year to aid rally competitors and clubs in New Zealand.

Paddon says: “I still have a long way to go to reach my goals, and at the same time I’m very passionate about our sport. To see more people competing in rallying and more Kiwis competing overseas is my ideal. I have been very fortunate to have a lot of support over the years from hundreds of people, so I want to return the favour. Details will become clearer soon but we are excited about this project.”

Following a short break in New Zealand, Paddon has now returned to Europe. He will soon be joined by Kennard to head to the 2016 FIA World Rally Championship’s opening round in Monte Carlo where the New Zealanders will make history as the first Kiwi pairing to contest the famous and notoriously challenging tarmac rally.