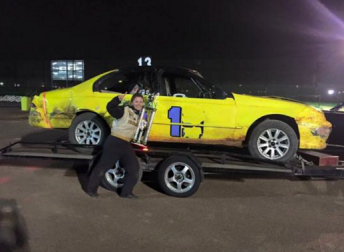 Barnes, who was the defending NSW Champion, actually crossed the line first in the Championship main event but an engine discrepancy in post-race scrutineering saw him disqualified and a delighted Sunerton awarded the win.

Kiona’s younger brother John Lodge Jr was the man who looked to be headed to victory lane but his beloved Falcon spewed radiator coolant and he spun in his own fluid ruling him out of contention.

Following Sunerton home for an eventual second place was Ian Harris ahead of Darren Quinn filling out the final step on the podium.

The next event to be held at Valvoline Raceway is next Saturday night, November 14 with the next round of the USC NSW that also features the annual Sid Hopping Shootout.