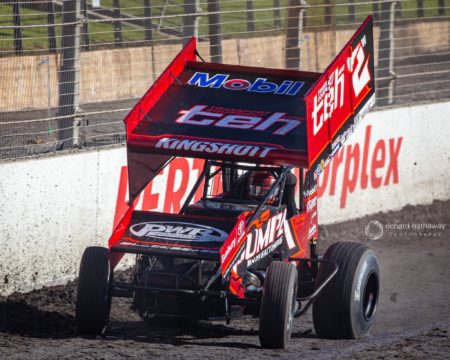 The new combination of Dayne Kingshott and the Krikke Motorsport team recorded their best performance by virtue of a podium finish in last Saturday night’s Western Australian 410 Sprintcar Title at the Perth Motorplex.

In what was only their third race meeting together, Kingshott and Krikke Motorsport duo reached a new level last Saturday night and it rewarded them with a close second-place finish behind Kaiden Manders.

After starting the Western Australian Title deciding feature race from position seven, following them qualifying fifth in time trials and then backing that up with two top-three finishes in his heat races, Kingshott finished the 30-lap event in sensational fashion and narrowly missed out on the top spot of the podium – the difference being only two tenths of second behind the winner.

“I had a good crack on the restart with eight laps to go and came up just short of the win, but the team and I are still really happy with the result,” expressed Kingshott, who on the night played his SEG Series ‘Joker’ card and it paid dividends by giving him the SEG Series point standings lead.

“I can’t speak highly enough about the efforts of my team, as we improved the car throughout the night and Matty (crew chief Matt Cochrane) made the right call for the feature race by putting a great car under me and it earned us a podium result.”

Kingshott continued on by saying that he and the Krikke Motorsport team are quickly finding their feet.

“I’ve been learning a lot in our first three race meetings and everyone is really happy with where we are at, especially after Saturday night’s performance by coming away with a podium result,” Kingshott said.

“I’m not an established Sprintcar racer and I’ve been given a wonderful chance with one of the country’s leading teams, but the team have been great and not putting too much pressure on me, as the goal is to always have a fun.”

With a three-week break now, Kingshott and the Krikke Motorsport team are now looking forward to the upcoming six-round Speedweek Series that is to be held over the Christmas-New Year period.

“The key for the team and I are to get as many laps together as possible, and the Speedweek Series provides us with the perfect opportunity to gain plenty of track time,” he enthused.

“With Speedweek Series being run over six race meetings in just over a week, it’s going to be no walk in the park, but the team and I are carrying good form into it and we are aiming to build on our current form.”

The next outing for Kingshott and the Krikke Motorsport team will be the opening round of the Speedweek Series at the Perth Motorplex on December 26 (Boxing Night).