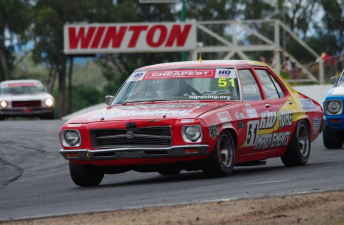 Wayne King and Gavin Porteous have taken out the 2014 Ken Leigh HQ 4 Hour at Winton Motor Raceway – their third successive victory in the endurance classic and fifth in total.

The race was split into two halves with the first half taking place in wet conditions on Saturday.

After qualifying seventh, King and Porteous completed the first half of the race in fourth position behind Neil Corey/Bruce Heinrich, Andrew McLeod/Rod Raatjes and Keven Stoopman/Brett Osborn.

The Stoopman/Osborn car had been particularly quick in the wet conditions, Stoopman opening a substantial early lead before slipping off the circuit. He and Osborn fought their way to the front before Osborn spun into the tyre barrier at Turn 2.

Also finishing the first half of the race on the lead lap were the father-and-son combination of Perry and Jake Bekkers, South Australians Matt Lovell/Peter Holmes (up from 25th on the grid), John Wise/David Parsons and Graham Boulter/Robert Wright.

The conditions improved significantly for the second half on Sunday and the King/Porteous car proved to be extremely fast in the dry, King fighting his way into the lead 10 laps into the second half. It was a lead that would never be relinquished, even during the pit-stop cycle.

Lovell/Holmes (engine failure) and Stoopman/Osborn (fuel problems) were casualties from the race, while Bruce Heinrich’s son Joel, driving alongside David Lines, managed to finish 11th despite gearbox problems in the race’s first half.

Shepparton drivers Stephen and Richard Whyte finished ninth, despite losing two laps in the race’s first half with some off-track excursions.

Walker also won Races 3 and 4 to take the overall round victory from the consistent Chris Adlam, with Draper recovering for third overall.

Variable weather conditions also ensured plenty of positional swapping in the Super TT races. Touring Car Masters competitor Keith Kassulke made a one-off appearance in his Ford XB Falcon Coupe, and he won three of the races to take the round victory.