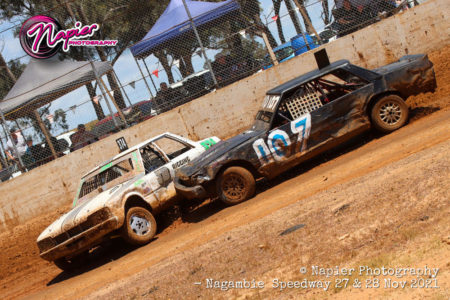 Nagambie Speedway played host to all the fun of Crash and Bash Racing when the Boys and Girls of the Victorian Crash and Bash Association all headed up to compete on the weekend across Saturday and Sunday the 27th and 28th of November. The season started great for Daniel Kettels and Danni Marshall as they took out the victories on Sunday afternoon and everybody had a blast.

Anthony Sgroi creamed the field in round one heat one with a ten second win ahead of William Leeson a former Victorian champion of the class and Zac Leeson in second, Sgroi leading all the way from lap one. Mark Hebblethwaite won the second heat ahead of his own Team Mate Richard Lewandowski and Kettels. Hebblethwaite also lead every lap on his way to his win. Rounding out the first round of racing Jarrod Hughes who had a terrific victory last season at Daylesford, came out and defeated Alan George and dear old dad, Kev Hughes. Jarrod started at the back of the field and his dad at the front and by the end of lap one, Jarrod was in fourth after starting ninth. On lap seven both Jarrod Hughes into the lead and George into second past Kev Hughes and that’s how the heat three finished.

Into round two and Sgroi did not let up, and pocketed another win, this time over William Leeson again and Peter Jenner. Sgroi from the second row moved to the lead on lap one Will Leeson followed him slotting into second and Jenner took his third spot on the lap three. The trio went all the way to the chequered flags in that order. Richard Lewandowski reversed the round one heat finish to get one over his teammate by less than a second, .666 in fact or an Andrew Corlett as you might like to say. Kettels finished third once again. Closing out round two George took a great win in an even closer finish in front of Jarrod Hughes with Bradley Trainor securing third spot. George won by .585 of a second as slotted into second early and held that spot first behind Adrian Russell and then behind Bradley Trainor despite leading lap two himself. George regained the lead on lap six and won from there.

Into the final round of day one of racing a treble awaited Sgroi and he had his biggest win so far and the biggest win of the class so far when he finished almost seventeen seconds in front of Zac Leeson and Jenner. Sgroi led from lap one and did so for all eight. Lewandowski once again defeated Hebblethwaite, and Big Ramon Rivero finished in third spot in a car that is worlds apart from his 1000cc powered Mini Sprint he also races. Lewandowski led from lap one also. Rounding out the Open Crash and bash racing for day one Trainor had a huge win in front of Kev Hughes leading all the way and Jayden Taylor.

After the Saturday night fire pits and parties subsided and the sun rose, racers got into day two Jarrod Hughes returned to the winners list in front of dad once more with Kevin ahead of Rhys West who finished in third. Dad led the race and therefore his son into lap seven before the lead changed hands. Into the second heat of the fourth round and Sgroi made it four from four and leading all the way, however this time Al George finished in second almost right behind with Chris Leeson third. Lewandowski picked up another win also by more than thirteen seconds when he defeated Kettels and Zac Leeson. Lewandowski led every lap.

The final round of qualifying races began with Jarrod Hughes far ahead of Jenner and Hebblethwaite. Starting in eighth Jarrod Hughes was in second by the end of lap one. He took the lead from lap four. Sgroi made it five from five with the biggest win of the weekend. A massive 34 seconds between himself and William George and James Carden-David. Once again Sgroi led from lap one. The final heat of the qualifiers ended with another win to Lewandowski. This time ahead of Zac Leeson and Taylor. Lewandowski led all the way.

Into the feature event for Open Crash and Bash. Top qualifier Anthony Sgroi who had dominated the two days of racing to this point, led the race early and was quickly carving his way through the field with others in tow. Sgroi tried to pass Kev Hughes and Hughsey was having none of that and ‘sent’ him. Sgroi’s car popped a tyre on the left front of the car and went for another five laps before heading infield. He got in the pits and there was nobody there to go to work on the car. Steve Mitchell said he was busy getting a Meat Pie and a Softy. Sgroi went back out with the flat roughed up a few cars and went back into the pits to load it on the trailer as the race continued.

Earlier, James Carden-David had a lap one disaster binning his car into the wall in turn one breaking the engine mount. The Watts link snapped off soon after and he had no power steering. Carden-David tried to continue on and ran out of tear offs along the way, eventually his car sounded like a 1946 Ferguson TE20 Tractor. It blew up eventually on the back straight and didn’t make the finish.

Rookie driver Lockie Rae had an absolute blast making it all the way to six laps to go before his car looked to hot on the gauges and he decided to park it instead of blowing it up like a good veteran tends to do. Rookie mistake made; he will learn.

Alan George blew a radiator hose with around eight laps to go before the timing chain dropped, one of the top guns Jarrod Hughes had a huge crash in his fifth heat caving in his front end and putting him out of the feature race action.

The Ladies also compete at every Crash and Bash Nagambie show and it was no different this time with three heats and a final on Saturday for the Gals. Let’s leave the fairer sex out of this as a statement, by gee these girls hit hard when they want to!

Stephy Grace started the Ladies Day of racing on Saturday with a victory. She was too good for Ebony Trainor and Danni Marshall. Grace started at the front of the field and led to the finish. Trainor then took victory in the second heat by a massive sixteen seconds ahead of Marshall and Nikki Sonnet. Grace took the lead on lap two before Trainor took the lead the next lap as Grace dropped out of the race. Marshall made it a third different winner in three races when she won the last qualifier. Marshall defeated Taylah Hughes who started last on the grid and Trainor was in third. Sonnet led until lap three where Kellie Latham took over. Latham’s raced ended abruptly on lap seven.

Marshall was the top qualifier after a tie break and Trainor was second, then Sonnet, Grace, Brenda George, Hughes, and Latham. Grace was the fastest on track with a 34.494 in the qualifiers.

Keen for the green, the Ladies took off quickly in the feature race, Trainor led lap one of ten in the final with Marshall and Sonnet chasing her. Moving forward on lap four, Hughes moved up into third and Sonnet dropped back behind George and Latham. Marshall made a move on lap seven and took the lead and on lap eight Hughes moved into second and Latham left the race. Official results were Marshall from Hughes, Trainor, George, and Sonnet. Marshall ran the fastest lap in the final of 39.726.

The Crash and Bash Association would like to thank Andrew Taylor from Andrew’s Car Removals for supporting the weekend.