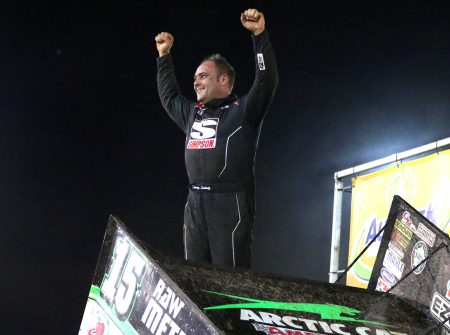 Archerfield Speedway promoter, John Kelly has sent a warning to reigning Australian Sprintcar Champion Kerry Madsen ahead of this weekend’s Titan Garages Australian Open, declaring that he will have to be in his absolute best form to defeat ten-time Knoxville Nationals and World of Outlaws champion, Donny Schatz.

It’s the 23rd running of the $20,000-to-win event this Friday and Saturday and North Dakota’s eight-time Australian Open winner will come to the fight well prepared already claiming two wins from three starts since boxing day in Brisbane.

“Donny has become the benchmark. He really races for pride now because he’s got nothing to prove. He’s the standard that everyone else is measured by, and he wants to keep that standard, and Kerry will have to be on his A-game if he’s going to beat him this weekend, Kelly said.”

Schatz’ first win of the Open came back in 2002 as a 24-year-old World Series Sprintcars contacted driver for Monte Motorsport, in a season where he logged seven wins and four runner-up finishes from fifteen starts, but still lost the overall championship to Max Dumesny.

Madsen has won the event twice, back-to-back in 2016 and 2017, but despite winning the preliminary A-Main last year, he was denied a hat trick of wins, finishing third to Schatz and Lucas Wolfe in the final on the Saturday night.

Brooke Tatnell will return to Archerfield with three Australian Opens to his credit as part of fourteen overall wins at the venue in World Series competition. Tatnell’s last podium at the event was in 2016 where he ran second to Madsen and beat Schatz to third, after the order was reversed in the preliminary feature the night before.

“The intrigue of fifty laps is a big drawcard for me,” Tatnell said, as the winner of the inaugural Australian Open in 1997 and the first winner when the format changed to fifty laps a decade later.

“It’s the most prestigious event in Queensland and I’m really looking forward to it. We’ve got a really good package with the Ray and Ash Scott #55 and I really think we can bring something for Schatz. I’m really excited for it!”

James McFadden will come in hot from his win on New Year’s Day at Warrnambool, and will be keen to replicate his maiden Australian Open win from 2013 where he beat Schatz by the barest of margins.

“That was probably the most perfect race I’ve ever driven, where we both started off the front row and I led every lap, but he still finished right on my bumper!” McFadden said.

The four-time World Series champion has always enjoyed his visits to Brisbane and relished the idea of attempting to add another Australian Open to his resume.

“It’s probably the most consistent racetrack in Australia, as John usually gets the surface pretty right up there, and I love the 50 lap deal too. It’s a lot of fun but you just have to drive smart and hopefully have the car setup for the last half.”

The speedwayaustralia.tv livestream for night one will commence along with Sprintcar Engine starts at 4:45pm with qualifying for the 46 car field from 5:50pm Queensland time.