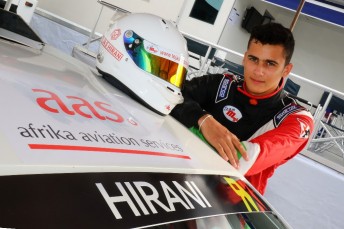 MEDIA RELEASE: Kenya’s Tejas Hirani will compete in this year’s RX Lites – a feeder series to the FIA World Rallycross Championship presented by Monster Energy – driving a Lites car with Olsbergs MSE. Hirani will become the first African to compete in a full RX Lites season.

The announcement was made at a press conference which was held in Nairobi earlier today where over 50 key media attended.  Hirani – who is just 17-years-old – competed in three RX Lites rounds in 2015 [Barcelona, Turkey and Italy] and will be looking to build on the experience he gained from last year.

“I am humbled and excited at the prospect of taking part in the upcoming championship as the first and only African,” explained Hirani, who won the 2015 Formula Gulf 1000 Championship in the UAE. “This is a dream come true for me and I would like to thank all my sponsors, Olsbergs MSE, my trainers and everyone who believed in me throughout my journey. My goal is to win.”

Olsbergs MSE Team Principal, Andreas Eriksson, added: “Tejas has shown great skill and talent in the events he has raced in so far in his young career.  With OMSE´s professional help to further develop him as a race driver and grow him as a person, he has the chance to become a future rallycross star.”

Hirani will embark on his first full RX Lites campaign at the World RX season-opener in Montalegre, Portugal (15-17 April). To prepare him for the challenge, Hirani will compete in the highly-competitive RallyX on Ice series which will kicks off in Pitea in Sweden later this month (31 January).

Rob Collinge, who has been managing and training Hirani since 2010, concluded: “Tejas will be staying with the Olsbergs team in Sweden for two months to prepare him for the RX Lites. The RX on Ice series which he starts in January is designed to hone his skills and control on ice under the guidance of professional tutors in the Olsbergs MSE team.”