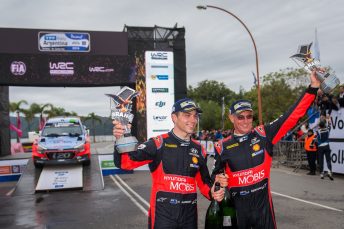 This week, during the lead-up to Rally Finland starting Thursday 27 July (EEST), Paddon and Hyundai Motorsport paid tribute to Kennard’s contribution to both Paddon’s career and the team.

Finland is where Kennard contested his first international event as a driver (Mänttä Rally) and his first-ever event as a co-driver (WRC Rally of 1000 Lakes), so it was fitting for this special celebration of Kennard’s rallying career to be held at Rally Finland. Finland is also Kennard’s second home and has influenced his life and career a great deal; it was originally meant to be the pair’s final event together.

Kennard says: “After 12 years as Hayden’s co-driver, it was hard to lever myself out of that Hyundai i20 Coupe WRC seat for the last time – which turned out to be in Argentina. But our deal has always been that I help Hayden in the most effective way possible and to have been his co-driver for so long, has been incredibly fulfilling and rewarding.”

Paddon says: “It has been a huge pleasure to work with John and it’s difficult moving forward with John not in the car as he has played such a big part in everything. It’s crazy to think how it started those 12 years ago and how far we have come. We have conquered so many highs and lows together and created lifelong memories.

“John has always been very clear from day one that he got in the car with me, that he wanted to help us achieve those goals, and for him to be 100% supportive and helping us means a lot. It gives me more confidence knowing that we have that sort of support. The decision that John took this year with us to make the change earlier than we planned speaks volumes that he wants what is best to help us achieve our ultimate goal.”

Kennard naturally rates their 2016 WRC win in Argentina as a career high in terms of results. “But overall, you’d have to say starting to work with a very young, driver who’d never even contested a national rally and, with the help of an incredible team of people, to now see that driver at the highest levels of the WRC, something that most people said was impossible for a Kiwi driver, is far and away our biggest achievement.”

Kennard says he could see real potential in Paddon right from the beginning. “However it was always a question of how far his determination would take him and, to be honest, I always thought I’d have completed my role inside the car before it came to him winning WRC rallies. So, to still be in the co-driver’s seat when we won in Argentina, really was a dream come true for me too.”

Kennard hopes others may be inspired by the path that he and Paddon have taken. “The fact that a not-so-young man and a boy can set out on a journey like this and get to this point, competing at the top of world rallying as a professional crew, is hopefully an inspiration to all drivers and co-drivers, any age, from anywhere in the world. From the level of interest, we see all over New Zealand at the moment certainly suggests it is at home.

“You know, you always have regrets, but in a sport like ours, it can knock you down really hard, sometimes again and again for really stupid reasons. I think the trick is to be able to put them behind you quickly and call them lessons, rather than regrets, so you can keep moving forward.”

Hyundai Motorsport Team Manager Alain Penasse says: “John has played an important role within Hyundai Motorsport since 2014. He has brought a wealth of experience that has helped Hayden to grow into one of the WRC’s most promising rally drivers, and also contributed to our entire operation. His involvement has been so beneficial that he will remain part of the team as Hayden’s route note car crew on tarmac rallies. It’s a new chapter for him, and we are delighted he is remaining so involved with Hyundai Motorsport.”

Kennard elaborates: “At the moment, I’m just trying to be Hayden’s eyes and ears around the events, so he has info on things he maybe can’t see during the very busy rally week. I’m also working with Seb, on the notes for stages that are re-used from previous years and, when the remaining tarmac events come round, I’ll be in the route note car with Australian Brendan Reeves giving the crew all the latest information we can about stage conditions, just before they contest them.”

Kennard is regarded as one of the friendliest and most respected people in the WRC; many will be pleased to see his role with Hyundai Motorsport continues for the present time.