Kendall and Robinson clean up at Archerfield

Kendall and Robinson clean up at Archerfield 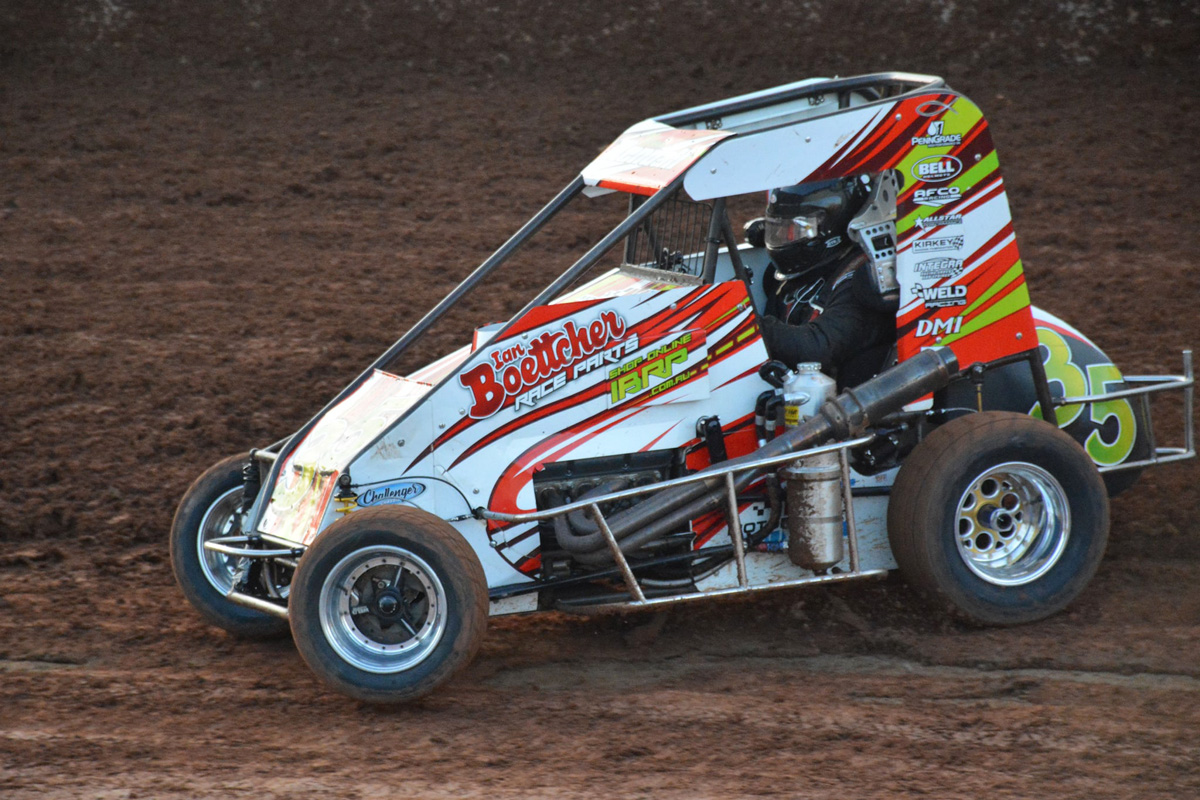 Whilst Michael Kendall and Mark Robinson both emerged comfortable winners in their respective feature races at Archerfield Speedway on Saturday night (March 6), their paths to victory were vastly different. Kendall led every lap from pole position to win the Midget feature race ahead of Brock Dean and Brendan Palmer, while Robinson worked his way from the back of the field to win the Dirt Modified feature race from David Clark and Chris Polsen.

In other events on the night, Sam Gollschewsky served up something very special indeed when he stormed from 18th to win round two of the Dondex/Redcliffe Wrecking Modlites Extreme Series, while Liam Williams prevailed in round five of the Done Right Paint Worx Formula 500 Series.

A strong 22-car field fronted for round five of the TFH Midget Series and it was Kendall who cut the quickest lap in time trial qualifying, stopping the clock at 13.430 to outpace Dean (13.494), Chris Singleton (13.636), Rusty Whittaker (13.708) and Darren Vine (13.742). Next quickest were Scott Doyle, Mitchell Rooke, Bodie Smith and Cody O’Connell, with 14 cars clocking in under 14 seconds.

A pole position start in the opening heat proved an opportunity wasted for Matt O’Neill when he spun in turn two on lap two and was collected by Palmer. In his first Midget outing for the season, Dean was sensational in his charge from the fourth row that culminated with a last-lap pass on Cal Whatmore to grab the win. Whatmore could only lament a lost opportunity in finishing second, while Queensland champ Reid Mackay would grab third.

Kendall took just two laps to advance from eighth into second spot in heat two before encountering some stern resistance from Lachlan Paulger, whose dalliance with the highline would result in him tipping over in turn four soon after surrendering the lead. Nathan Mathers assumed second spot, only to head infield soon after and elevate Vine into the runner-up position, with Rooke claiming third.

Heat three saw Whatmore pay heed to the lessons learned in his opening heat, this time making the most of another front row start to keep Dean at bay, with Palmer home third.

Kendall cruised home in the final heat, again surging from the fourth row and finishing more than three seconds ahead of O’Neill and third-placed Paulger.

After some superb racing in the heats, the feature race proved a race of attrition in what was really just a fight for the final podium position as Kendall and Dean had the top two spots safely in their keeping from the outset. A pile-up in turn two on lap two eliminated Whatmore, O’Neill, Scott Doyle and Barry Gibbs, with only one more lap completed before another restart ensued following a spin from Nick McDowall in the same spot. Two laps later and the race was halted again when Cody O’Connell found himself upside down in turn three, with just two more circulations completed before yet another interruption when Smith found himself sitting atop Mackay in turn four, eliminating both drivers. The final restart came on lap eight when third-placed Singleton got out of shape through turn one and was tapped into a spin by Vine. As has been his burden all season, Rusty Whittaker was hampered by mechanical issues in the heats but was making forward progress from the back of the pack and had climbed into the top five despite the incessant interruptions, only for his equipment to let him down again and render him a spectator once more. With McDowall, Darren Dillon, Tony Stephen and rookie Jesse Harris also opting to watch from the infield, just seven cars would make it to the finish. Untroubled in maintaining possession of the lead through the myriad restarts, Kendall wasted no time in extending his advantage to finish more than six seconds ahead of Dean to clean sweep the program. The fight for third heated up as the laps wound down and would ultimately be decided in the final corner. Having slipped ahead of Vine on a couple occasions without being able to hold the position, Palmer pounced in the final turn to snatch third in only his second meeting since returning to competition. Although aided by the demise of others, a fifth-place result was a worthy result for Paulger given his heat race heroics, while Brad Dawson and Brodie Tulloch were the only others to go the distance.

Having only mustered a small field, to their great credit, the Dirt Modifieds opted to invert the field for their 20-lap feature race, putting Polsen and Darren Tindal on the front row and confining Clark and Robinson to the back of the bus. Chasing his third feature race win for the season at Archerfield, Clark had earlier won two of the heats, with Robinson taking the other. The beauty of such a format is that it forces the backmarkers to work hard for their success and offers up opportunities for others to find themselves on the podium and that is exactly how things played out. Polsen led the field away as Clark and Robinson wasted little time in moving forward, the latter making his way into the lead on lap nine. Clark, meanwhile, survived a couple of near misses in his efforts to round up Tindal, who certainly afforded his rival no courtesy. Clark cleared Tindal on lap 12 and then relegated Polsen on lap 15, by which stage Robinson was long gone on his way to winning by more than seven seconds. Polsen remained third at the chequer, followed by Geoff Phillips, Andrew Firth and Luke Dunn, with Tindal, Terry Leerentveld and Phil Roberts rounding out the field.

With no inversion of any kind for their feature event, there was an air of predictability in the outcome for round five of the Done Right Paint Worx Formula 500 Series with Liam Williams making easy work of proceedings from pole position. James Kennedy chased hard and cut the quickest lap of the race in pursuit, only for his momentum to suffer at the hands of a couple of untimely restarts, the first of which came when Mitch Whittaker spun in turn four on lap seven. Ryan Newton impressed in finishing third after starting deep in the field, with Kurt Wilson and Cameron Bertuch next in line. Brock Thornton, Luke Edwards, Whittaker, Adrian Farrell and Libby Ellis rounded out the top ten. Brodie Davis started alongside Williams on the front row but failed to fire a shot and had headed infield after three laps, while another youngster in Jared Boys made a more spectacular exit when he rolled in turn four on lap nine.

Kennedy won the opening heat in advance of Whittaker and Bertuch, with Williams downing Davis and Brady Argles in heat two.

The final heat went to Wilson over Williams and Luke Edwards, while a fifth-place finish was enough for Davis to secure a front row start in the feature.

Following heat wins to Trent McLean, Nathan Politch, Terry Leerentveld, Dylan Hunter, Klinton Hancey and Sean Rose, the 20-lap Modlite feature race dished up the drive of the night with a stunning run from Gollschewsky. Having been confined to the B Main after failing to finish his second heat race, Gollschewsky started the feature race from position 18 and stormed through the field to emerge with the lead on lap 16. Given that all 20 cars that started the race were still running at the end, it was a remarkable performance from Gollschewsky who, having advanced into seventh after just two laps, was sitting in third spot after eight laps. Starting from pole position, Hancey no doubt expected his biggest threat to come from his front row partner Dylan Hunter or the pair starting from row two in Nathan Politch and Julian Olley. As things transpired, Hancey was able to distance himself from this trio, only to find himself unable to fend off Gollschewsky when the moment of truth arrived. It was Olley who would secure third ahead of Hunter and Rose, who also transferred via the B Main. Politch backslid to finish sixth, followed by Callum Beerling and Brock Lehfeldt, with Warren Hooper and Kyle Honour completing the top ten.

After winning his first heat, Leerentveld struck trouble in his next outing, rolling in turn two and failing to finish. Back on track for the B Main, things went from bad to worse for the winningest driver in the history of the category when he rode out a series of vicious somersaults in the same corner. He emerged unscathed and able to take his place in the Dirt Modified feature.

Wayne Kirkman and Scott Taylor split wins in the Outlaw Sedan heats and then it was Kirkman who prevailed in the feature. A triumvirate of Taylors filled the next three spots with Scott, leading Daniel and Michael to the flag, with Peter Van Lissum the only other finishers.

Such is the level of competition in Formula 500 Juniors at the moment that nine of the ten competitors emerged with a top-three finish in either a heat race or the feature. Following heat wins to Kinser Claridge, Blake Matthews and Ewan Oliver, it was Matthews who bested the field in the feature race, leading home Bailey Leeson, Kacy Lee Black, Claridge and Noah Ball.

Ryley Smith was the pick of the Junior Sedan crop, winning two heats before running away in the feature to finish more than three seconds clear of second-placed Josh Weir. A mistake late in the race saw Connor Reeves, who was the only other heat winner, slip back to third but remain comfortably clear of the next runners in Nathan McGregor and Harley Graham.

Stockcar heat wins fell in favour of Stu Jefferies, Fraser Ward and Peter Hosking, with Ward then going on to win the feature race by more than eight seconds. Graeme Rangihuna and Hosking filled the minor placings ahead of Bryce Moorman and Sam Bateman.

The next event at Archerfield Speedway is on Saturday, March 20 featuring twin Sprintcar feature races for round ten of the East Coast Logistics Sprintcar Track Championship, along with AMCA Nationals, Wingless Sprints, Formula 500s, Compact Speedcars, Open Sedans and Ford vs Holden vs Sigma sedans.