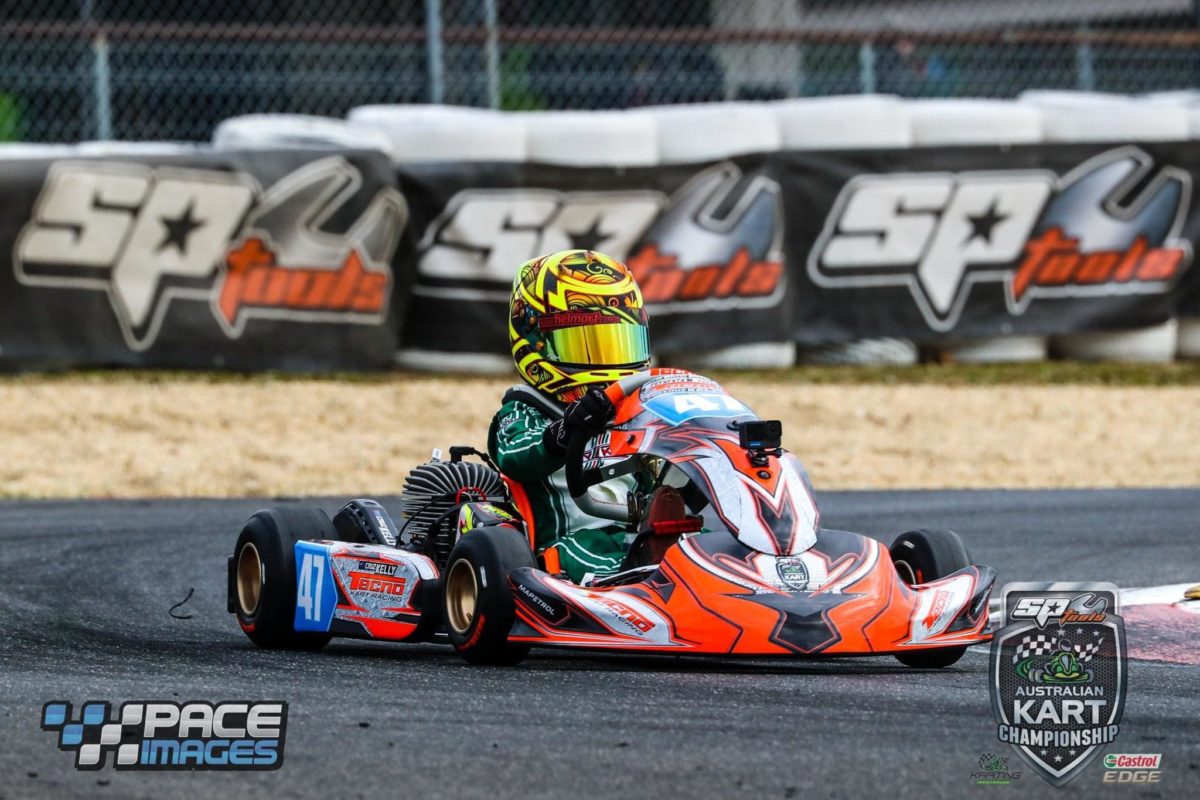 Most recent SP Tools Australian Kart Championship round winner Cruz Kelly took on the third round of the series at the Eastern Lions Kart Club. Kelly who leads the championship going into the third round was looking to add to his points tally and round wins. Cruz was aboard a new Tecno Kart chassis and was looking to continue his push to become Australian number one.

Kelly utilised Friday practice well and set the fastest time in practice, having him first out the gate for Friday afternoon qualifying. The Tecno Australia driver was able to go straight to the top and was putting in fast and consistent lap times. Cruz had challenges from Archie Bristow and Carter Lamperd for pole position and had to dig deep. Kelly was able to hold his nerve and take pole by over a tenth of a second.

Kelly was off pole position for a wet opening heat on Saturday morning. The current Australian Kart Championship leader was able to jump away off the start and open up margin straight away. Cruz had his kart setup in the window and was showing kart control skills beyond his years to open up margin on the field. In a dominate display of driving, Kelly was able to take victory by over seven seconds and start his racing weekend in the best possible fashion!

Cruz was ready to go for heat two and was looking to do much the same as he did in heat one. The missile got a great start and had his Tecno Karts Australia entry working very well. Once again under tough and wet conditions, Kelly was able to open up margin and continue to put in a dominate performance. Cruz was able to extend his championship lead by taking victory over Tecno Karts Australia stable mate Jensen Damaschino.

The third heat was Kelly’s final race of Saturday and it was approaching dry conditions for the young driver. Cruz made it three from three off the start leading down into turn one and the young driver was looking to put the head down. Kelly was able to once again put fast, smooth and consistent laps to open up margin on his challengers. Cruz was able to make it a clean sweep on Saturday taking three out of three race wins!

Sunday morning was upon Cruz and the circuit was back under wet conditions for the final heat of the weekend. The Tecno Kart Australia karter got another clean get away and showed that he was superior in the wet, tough conditions. Kelly was able to put in his most dominate performance of the weekend! Cruz took victory by over nine seconds and his clean sweep had him off pole position for the round decider.

The final was difficult before the race even started due to choosing between slicks or wets and set up to go out on track with. Kelly was able to lead off the start line but was under pressure in the early stages from Carter Lamperd. By mid-race it was a three to four kart battle at the front with Kelly dropping down as low as fourth at stages throughout the final. In a hectic and chaoatic finish, Kelly was able to work his way back up onto the podium in third place overall!

Cruz father Marcus spoke post weekend of his young missiles weekend at Puckapunyal. “Round 3 at Eastern Lions Kart club was an absolute cracker for Cruz making him the one to chase heading into the final 2 rounds of the championship. Being fortunate enough to finish all races in challenging conditions, qualifying on pole, four solid heat wins and a third place in the final saw Cruz Kelly top points man again for the third round of AKC in a row”. Kelly will be looking to continue his championship assault at the next round of the series at the Emerald Kart Club.