Keller back to his best at MMS

Keller back to his best at MMS 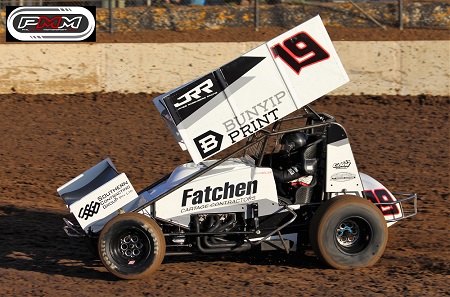 After a year away from the driver seat Brad Keller made a triumphant return to racing with an all the way win at the Murray Machining and Sheds Murray Bridge Speedway in only his second start back. Following a heat win and a second placing in his heats Keller started on the pole and then went on to dominate the A-Main, in what was Round 2 of the Sprintcars SA Tri-Series.

Second in the 30-lap finale was Joel Heinrich, who celebrated his 25th Birthday earlier in the week, with his first podium result in a Sprintcar. Despite the fact Keller was victorious in the event Heinrich was clearly the driver of the night as his previous best was a sixth placing at Whyalla. Heinrich was also the fastest qualifier in Time Trials and he also claimed his maiden heat win.

Local Murray Bridge racer Ryan Jones was once again on the podium as he finished third. It was the third time in as many starts this season that the Murray Machining and Sheds #63 had finished inside the top three and the fourth time in a row at a Sprintcars SA sanctioned race, a streak that dates back to March.

After a poor qualifying effort that saw him miss the top 6 invert in the heats Marcus Dumesny fought back superbly in the main event charging from position 10 on the starting grid to get the better of Lisa Walker in what was a great battle late in the race. Mark Caruso, Jessie Attard, Steven Caruso, Glen Sutherland and Ben Morris completed the top 10. Austin McDonald secured his best A-Main finish in eleventh while Daniel Smith and Mike Fox were the only other finishers.

The only red light of the A-Main came out on lap 8 for impressive rookie Max Vidau, who got hung up in the turn two fence after contact.

Strathalbyn’s Daniel Pestka unfortunately didn’t get past Time Trials after damaging the engine in his Stark Racing #27 continuing the tough start that he has endured with his new team.

The next appearance for the Sprintcars at the Murray Machining and Sheds Murray Bridge Speedway is scheduled for December 5, 2020 with a Sprintcars SA Club Show.