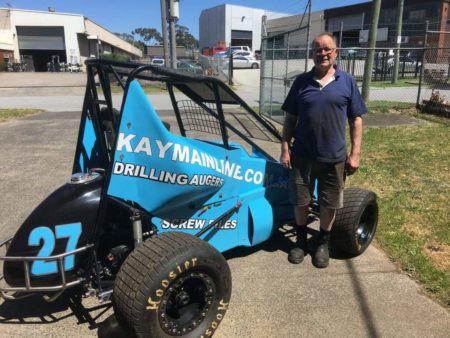 This weekend the Victorian Compact Speedcar Club return to Redline Raceway in the Greater Ballarat region for the annual Keith Astrella Memorial honouring the late racer who was a very popular figure amongst the club for many years.

Fresh off the Legend’s Trophy event last weekend, a competitive field of entrants are listed to race and includes Tania Hallett who finished second this past Saturday night in the feature event. Tania is one of three members of the same family competing along with her brothers Jamie and Justin Paull, which is very fitting considering the family man Keith Astrella was.

Adding to the family atmosphere of the event brothers Butch and Mark Hutchinson will compete in a car each as will partners Louis Rodriguez and Ann Clarke, you cannot get much more family than this line-up.

Whilst Hallett was sensational last weekend and could easily be our winner this Saturday night, her brother a former national champion Justin is determined to get one back on his sister having trailed her across the finish line last week. Justin returns in his own car this weekend tuning up before the upcoming Victorian title. Hallett would love to add a blue ribbon feature win to her list of achievements just to add a little more salt to Justin’s wounds.

Louis and Ann are hoping for a much better weekend this weekend. Louis was plagued by radiator hose issues and Ann had a crash that knocked her about in the feature event. Victorian Champion Louis Rodriguez will be hoping to finish ahead of Justin Paull and recover some points in their aggregate standings.

Butch and Mark Hutchinson will try to one-up each other this weekend with the aim that one of them will actually be on top the number podium step later in the evening. Butch returns to last weekends winning car whilst Mark is hoping to have sorted out his electrical issues from last weeks final to give Butch a hard time Saturday.

The last nomination to mention is Jamie Paull. Jamie will again join us in the 21 car and will compete with the Compact’s and a featured Sedan category at Redline this weekend. The talented Sedan state champion has really taken to our open wheel class and it is not beyond possibility that he will be in our podium results on Saturday also.

Keith Astrella became interested in Compact Speedcar racing around twenty years ago before purchasing a race car. It took him a while to have a competitive car running in the mix for a podium, once he reached that stage there was no stopping him.

Keith loved the whole club atmosphere with great friendly people, lots of chatting about racing and of course about cars and Keith was one of those people more than happy to lend a hand if somebody else’s car needed a repair done.

Astrella enjoyed many enjoyable trips all over Victoria and interstate, it became a passion to him and if he won a trophy, that was an absolute bonus. If it wasn’t for his early passing in life, he would still be out there today flying around the speedway, laughing and having an absolute ball.

The Astrella family are excited to join us on Saturday to crown a winner to honour the great man Keith Astrella with the Victorian Compact Speedcar Club.

The previous only winner of the event was Mark Cecil driving for Louis Rodriguez.