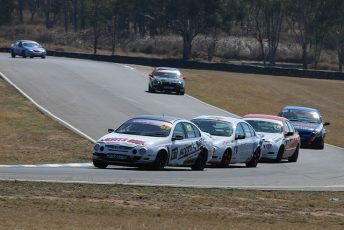 With two wins and a second, Kearns closed the gap to series leader Jamie Furness to two points with one round remaining, holding off a challenge from Furness, John Carter and Shayne Hine in three closely-fought races.

Warwick local Furness took pole position before Kearns gained the lead early in race one. Kearns withstood a ferocious charge from Furness, Carter and Hine to take the opening race win, all crossing the chequered flag within 1.5 seconds. A fifth place for Brock Mitchell sealed an all-Ford front five lockout.

The intense fight up-front recommenced in race two, as Furness and Kearns battled door-to-door for the entire duration. Kearns got the best of Furness by three-tenths of a second at the chequered.

A close battle for third throughout the race saw Hine overtake Carter at the T-Junction on lap three as the pair ran in close quarters until the finish.

Contact between Kearns and Furness on lap two of the final race saw Furness drop back to fifth place, recovering to third by the finish. Kearns was pushed hard by Hine in the closing laps before a late race charge from third to first by Carter saw him take the win in third outright for the round.

With a string of fifth placings Mitchell secured fifth place for the round, while Luke Andersen, Brad Carr, Martin Deckert, series debutant Cameron Klee and Gerard Miscamble wrapped up the top ten.

Kearns was relieved to take the round win, and to close the points margin to Furness in the process.

“It ended up that we snuck through with some good points and topped the weekend, but not through anything else except good luck I think,” said Kearns.

“That was the hardest racing i’ve been involved with for a while. It wasn’t easy, but it was great fun.

“Thanks to Scott and Elliott at Scott’s Rods, Andy and Adrian back at the shed and Warwick for the late brake change before the last race.”

The Queensland Saloon Car Series returns to Morgan Park Raceway for the final round at the CAMS State Championships on December 2-3.