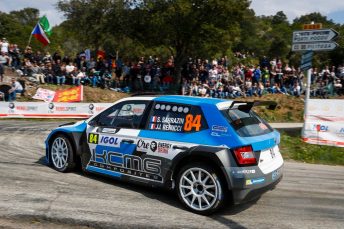 Following the announcement of Stephane Sarrazin’s newly-launched racing team early this month, KCMG Composites has once again committed their support to the French ace’s FIA World Rally Championship’s campaign in 2017.

Sarrazin unveiled his new Skoda R5, which donned KCMG’s widely- recognised blue and white livery, during the first rally of the season at Corsica, France. Sarrazin managed to record some impressive stage times at the wheel of his Skoda R5 with his co-driver, Jacques Julien Renucci after the three-day event and finished third place in class.

KCMG Composites and the French ace’s partnership, which now spans the course of three seasons, have promoted the former’s business activities through various racing disciplines. This year, KCMG Composites and Sarrazin will continue to work together to garner success through WRC’s celebrated global motorsport platform.

Stephane Sarrazin: “After two years promoting KCMG Composites on the different championships that I was engaged in, I am very proud that our partnership has taken a new dimension. Indeed, now my own Racing team, “Sarrazin Motorsport” will bring the KCMG brand on top of many podiums. It is fantastic to get KCMG’s support as the team has a huge experience in racing activities, and is developing a lot of parts in Composites used on the different cars that my team and I will be using.

“Many thanks to KCMG Composites CEO Paul Ip for his confidence, support and friendship.  See you soon on the top of the podium.”

Paul Ip, KCMG Composites Chief Executive Officer: “It’s been a pleasure to support Stephane in one of his racing activities. He has been KCMG Composites’ ambassador since 2015 and the past seasons we’ve seen him make his mark in various motorsport disciplines, from rally and Formula E to endurance racing – this embodies the same dynamism and diversity that KCMG Composites apply to their business and activities.”