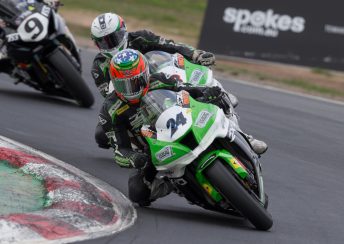 In the unofficial ‘winter break’ in the 2017 Yamaha Motor Finance Australian Superbike Championship presented by Motul Pirelli (ASBK) calendar between the Spokes.com.au presents Round 3 at Winton Motor Raceway and the highly anticipated Round 4 at Hidden Valley Raceway, MA caught up with Kawasaki BCperformance Team Manger Kelvin Reilly his Superbike lead rider, Robbie Bugden (ZX-10R), to chat about being touted as the ‘underdog’ Superbike outfit.

“I bought a ZX-10R to go racing with a couple of mates of mine to compete at the Phillip Island 8 Hour, as a one off.” explained Reilly. “The race was cancelled and I thought, ‘what am I going to do with this bike?’ I raised sponsorship money and put a rider on it and I’ve never looked back! That was four years ago, and we’ve since got support from Kawasaki.”

Now Reilly has a two-rider outfit in the Yamaha Motor Insurance (YMI) Superbike class within the championship.

“Obviously it’s been a fairly successful year so far, I believe in my riders and team. The Kawasaki ZX-10R is definitely a race-winning, capable package and we’re improving it all the time and adapting to the ASBK every race meeting.” Reilly said.

Riders Bugden (36 y.o) and Kyle Buckley (21 y.o) have earned the tick of approval from the boss.

“Robbie is a previously established ASBK front-runner. We expect him to fight towards the front. We are very happy with how he’s tracking so far, and he’s confident and heading the right way to fight until the end with the other contenders.

“This is Kyle’s fourth year with me, and this is now his first year on a Superbike. I’ve always believed in Kyle from the beginning. He has the ability and has the capacity to go a long way. Being the top rookie in the championship is no surprise to me with his level of talent.”

The team has been unofficially tagged as being the underdog of the ASBK, as it competes against the might of the factory teams, Reilly shared his thoughts on the tag; “I don’t mind. Everyone is entitled to his or her opinion, whether we’re classified as the underdog, above dog, side dog, fat dog it doesn’t matter! We are a new team; this is only our fourth year. To be racing against teams with significantly more experience than us and to be doing so well, is a solid effort.

“Obviously some of the bigger teams have budgets that are considerably larger and they have a lot of recourses at their disposal, however, my philosophy is its not only a matter of how much money your team has, its also about being smart and managing your outfit effectively.” according to Reilly.

Queenslander, Bugden shared what he’s been up to over recent weeks in the break; “I’ve been training hard and making sure my preparation is as good as it can be before heading to Darwin. I’ve been working with my personal trainer constantly and I can’t wait for the second half of the championship.”

“A win at the upcoming rounds is achievable without a doubt.” said Bugden. “The goal was always be within striking distance with the other championship contenders at the halfway mark and we’ve managed that. We realise that to be a threat for the title we really need to start winning races. The upcoming tracks should suit the bike, so now is the time to strike.

“Qualifying has been marked as an area which we need to improve in. If I had a better grid position at Winton, it could have gone a long way to challenging for the win. That’s my achilles heel at the moment.”

“Winning five championships in New Zealand is a big highlight for me. It’s one thing to go over to win a championship in a different country, but to win five with three in a row is pretty tough as you’ve got a massive target of your back. Other highlights include racing in the Suzuka 8 Hour and competing in Europe as well. I’ve stuck myself in the right places in the right time and life’s taken me on quite a ride so far! (pardon the pun)”

The next round takes place at Hidden Valley Raceway, in the Northern Territory on 7-9 July, and Bugden is looking forward to competing at the track that holds positive memories.

“The event at Darwin last time we were there was amazing, all the locals get behind it! As you walk down the streets, there were flags flying for ASBK. Good crowd and electric atmosphere. As soon as I heard we were going back there, I was very excited. The track should suit the ZX-10R really well and its a track where I’ve enjoyed success in the past.”