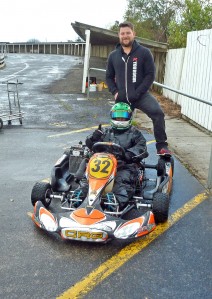 If you are going to try karting, there are few better to introduce you to the sport than Aaron Cunningham.

Motorsport enthusiast Dave Lock, of Campbells Bay, was the charity auction winner for a kart racing experience led by Aaron at the Kart Sport Auckland headquarters in Rosebank.

Aaron was one of many generous individuals and businesses to donate goods and services to The Great Guide Dog Online Auction run by Bayleys real estate.

His contribution helped to raise a total of $173,000 towards the training of Blind Foundation guide dog puppies.

On July 25 Dave met Aaron for a chat about the sport before taking to the track for a series of 12 high speed laps around the course.

Racing karts sit around 50mm above the tarmac and can reach speeds of more than 150kmph. The engines range in size from 125cc to 250cc.

“It was quite an adrenaline rush. There was a main straight bit where you could really put your foot down and go for it. It was quite wet and I spun out several times, but it was a lot of fun,” Dave says.

While he enjoys watching motor racing, Dave says he has never been behind the wheel of a go kart.

“I’m only an armchair enthusiast at the moment. But it might be something I get into next year. Karting is more affordable than other motorsport, you can just get out there and you don’t necessarily have to be mechanically minded.”

The Blind Foundation is one of several charities Dave routinely supports and he says it is gratifying to know his purchase will help New Zealanders who are blind or have limited vision.

”I always think if I was blind or had poor eyesight these types of charities would make a huge difference to my life,” he says.

Aaron Cunningham and his two brothers have dominated the New Zealand karting scene for more than a decade.

Their father’s office was not far from the local kart club and the boys would watch the action from behind the fence line while he worked on the weekends.

They eventually convinced their father to buy two karts and before long they were beginning to make a name for themselves on the junior club circuit.

“Aaron is a really nice guy; he was very patient and gave me a lot of freedom even though I was using his high performance kart. It was a real learning curve for me and good to get an understanding of how it all works,” Dave says.