Karters to showcase their sport at CRC Speedshow

Karters to showcase their sport at CRC Speedshow 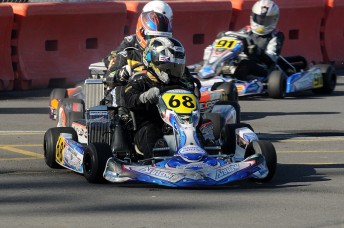 Despite their obvious personality and nationality differences, Formula 1 drivers like Lewis Hamilton, Nico Rosberg and Sebastian Vettel all have one thing in common – a career start in karts.

And show-goers at this year’s CRC Speedshow can find out how to get into this popular and intense form of motorsport.

Long regarded as ‘the first step on the ladder’ to Formula 1, karting – or KartSport as it is now called in this country – in fact fulfils dual roles: as a nursery for the next generation of motor racing stars, and as cost-effective place for motorsport fans of all ages to satisfy their need for speed.

The Right Karts Celebrity Charity Kart Challenge was a popular addition to the outdoor entertainment at CRC Speedshow last year and it is back by popular demand at this year’s show at Auckland’s ASB Showgrounds this weekend (July 19-20).

Also back are a bracket of quick-fire races for current karters – Senior ones (15 years of age and over) for the owners of the 125cc Rotax Max Light karts being used by the celebrity drivers in the Charity Challenge, and Cadet (ages 6 to under 12) ones for drivers using the sport’s new Vortex ROK engines (as seen on a recent edition of Sky TV’s weekly motorsport programme #SkySpeed).

“It’s a chance for us to actively showcase our sport in front of what you could only describe as the ideal audience, motorsport enthusiasts,” says KartSport New Zealand manager Robert Hutton.

“KartSport has always had a presence at, and got a lot out of, CRC Speedshow, but having actual races for current members takes it to a whole new level.”

Bar turning up at a typical KartSport Auckland or Mt Wellington club kart meeting show-goers could not get a more authentic example of the fast-paced action that is at the heart of the sport’s appeal.

“That’s right,” says Hutton, “as far as we are concerned it will be run like any other race meeting, it’s just it will be on a smaller, temporary circuit.”

Each day there will be two races with 12 drivers in each class as part of the Ideal Wheels live action arena entertainment at 11.00 am and 1.15 pm, as well as the 3.15 pm running of the Right Karts Celebrity Charity Kart Challenge.

Kart shop Right Karts, and the KartSport Auckland and KartSport Mt Wellington clubs will have stands with information about the sport, and with the pit area open before and after the actual races, show-goers are encouraged to come and check out the karts at close quarters and find out for themselves what they are all about.

“Everyone is more than welcome to come down, have a look at the karts and displays and talk to the people involved. KartSport is a true family sport so if you have a son or daughter interested or you are keen on getting them into a kart, there will be plenty of Mums and Dads already involved in the sport to talk to,” Hutton says.

As well as being involved in the race meeting and Celebrity Charity Challenge, Hutton and some of the current and former karters will also be speaking and available to answer questions at the ‘How to get into motorsport’ seminars which are running at the show both days.

Now New Zealand’s largest and most popular automotive and motorsport event, CRC Speedshow runs at the ASB Showgrounds, Auckland over the weekend of 19 and 20 July 2014.

With 28 marques of new cars and motorcycles represented, the Castrol EDGE / Teng Tools Custom Show, the Classic Cover Insurance Classic Show, the New Zealand Indoor Off-road Championship for radio-controlled racers, entertainment for adults and children, and hundreds more cars and motorcycles on display, this year’s CRC Speedshow is the biggest yet.