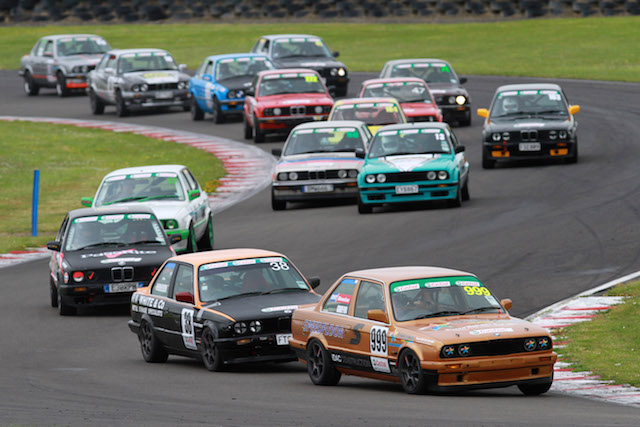 Contesting the E30 category in the seven round North Island based series, Hodgson emerged as the most prolific performer against fellow graduates Matt Griffin, Richard Oxton and Shane Hodgson.

The 32-car E30 class field was split in two and competed in conjunction with the Open and 2L classes for the series round for the 2015/2016 season. Each class contested three eight lap races.

“I knew Oxton was going to be back and Matt (Griffin) had his motor sorted so I was going there to battle those two and Shane as well – to hopefully come away with the top spot,” explained 2009 Speedsport Scholarship winner Aaron Hodgson.

“While I got second in the qualifying group behind my brother Shane it was Peter Ball who saved my weekend thanks to his help changing a water pump.

“Then in race one Shane and I managed to break away from the field before I got to pass him for the lead. Straight after that he dropped down two cylinders. I looked behind me and saw him pulling off the circuit – and that was his race.

“To get that first win pumped me up for the weekend. You know by then you’ve got the car setup right and I could concentrate on adjusting tyre pressures to tweak the handling rather than tune it. 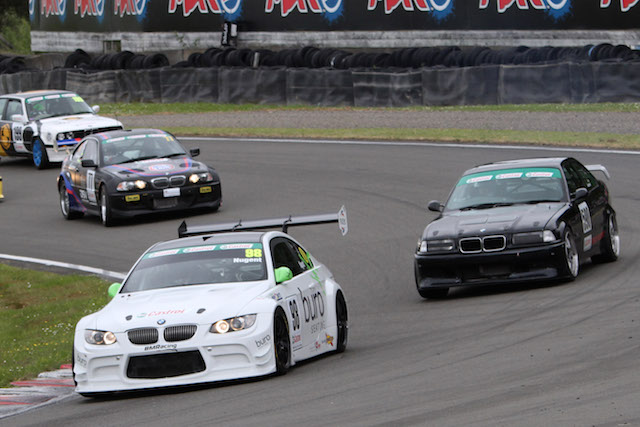 “In karting you are used to being wheel-to-wheel so when you have Richard, Matt and Shane around you know their moves and know they are honest in their intentions by leaving good racing room. It also shows in other karters competing – how they can race so closely and still leave room.

Also in the timesheet highlights was Castrol BMW Race Driver Series Scholarship winner Robert Hill, who got his New Year into high-gear early with a second placed finish in the opening race.

In the Open class the E92 M3 V8 of Auckland’s Andrew Nugent was ahead of the field in qualifying and took a comfortable opening race win.

Stealing away from Nugent’s dominance; Dan Slater took his first win of the season, in Saturday afternoon’s reverse-grid handicap start.

Rapidly losing engine power as the racing progressed the win would be his last outing for the weekend as a fueling problem damaged the engine in his 535i model BMW.

“The engine fully Chernobyled itself after that race – meaning I couldn’t go on,” explained Slater of his hero to zero result.

“I noticed it in the previous round, that it wasn’t going right, and while I’ve been trying to remedy it the problem has recurred.

“All I was wanting to do this weekend was bring it home in all three races – to finish the weekend with the car undamaged and engine still running.”

Nugent started the reverse grid handicap race in last place – seven seconds behind Robert Berggren.
That gave Slater an early opportunity to claim places while Berggren and Nugent raced to narrow the time deficit to the front pack.

“Normally I’m matched lap time wise with Berggren so I knew my car wasn’t going properly when I was so far off his pace in the opening race.

Then in the second race it dropped a cylinder to be only running on five – although I still managed to get past the rest of the field. Then on the last lap it dropped to four and started losing water – that was it,” he explained.

Leading the 2L category for the first half of the weekend Hamilton’s Martyn Seddon came to a grinding halt mid-race Sunday morning.

Fastest in qualifying and having taken the opening race win he was adding to his weekend lead by finishing second in the reverse-grid handicap race.

Starting at the front for the weekend’s final race he discovered he faced a race driver’s worst nightmare.

“I ran out of fuel,” explained Seddon. “I was pouring the last of my fuel for the weekend into the car and thought ‘here we go – this isn’t going to get me the distance’. So I tried to conserve as much I could while letting a few cars get past me and thought I wasn’t likely to make it so might as well go have some fun – so I put the hammer back down.

“Sure enough – I ran out with two laps to go.

“What got me by surprise and where I came unstuck this weekend – I was enjoying myself too much in the 20 minute qualifying session. Normally we only get eight laps and that extra time out on the track this weekend is what took up the extra six or seven litres that would have had me home safe in the final race.”

During that qualifying session Seddon validated his car’s setup strategy – by opting for less tyre camber: “Early in the weekend I found the other guys were struggling with grip level and so I stood my tyres up – and that seemed to work for me rather well.

“I thought the track was excellent and with the right setup the car goes well there.”

With only two weeks until the mid-way mark in the season the action returns to the evolving Hampton Downs circuit 30-31 January. The BMWs will compete as part of the international TRS single-seater weekend.