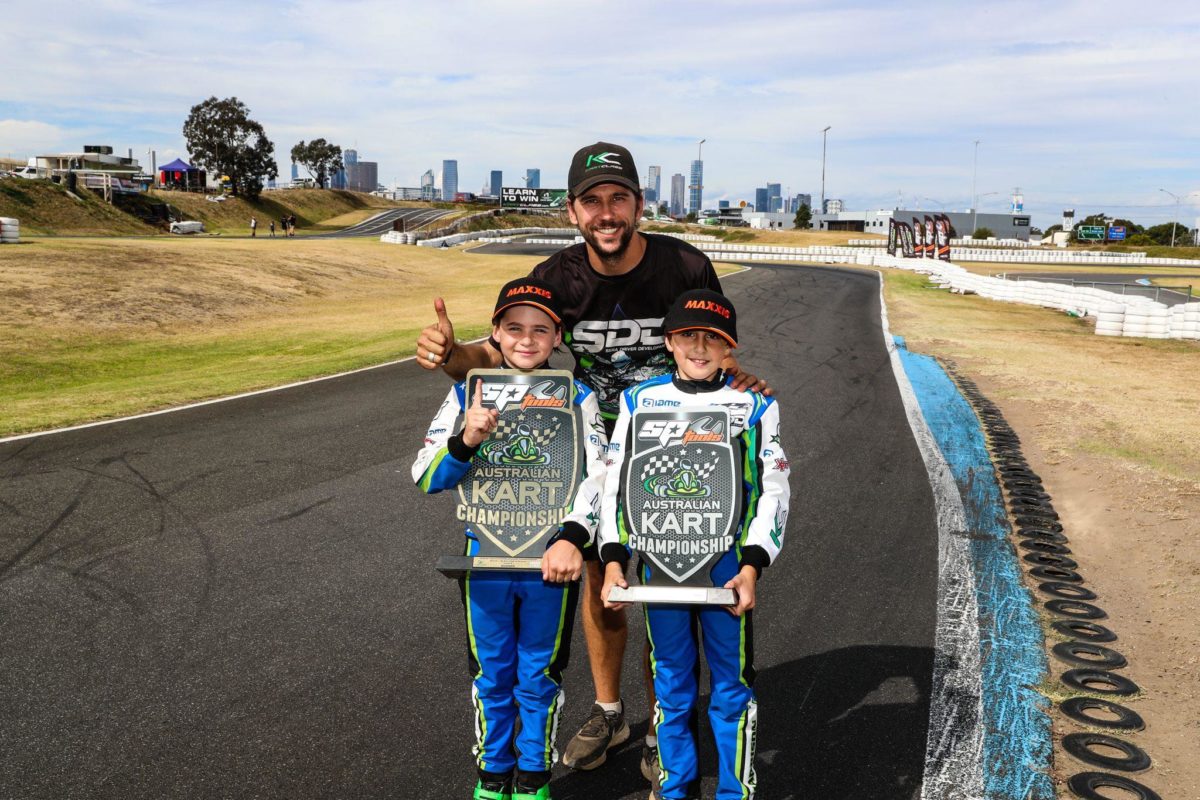 David Sera is one of the biggest names in the world karting ranks! Sera, the most successful karter in karting Australia history, has formed his own team of drivers under his “Kartclass” banner to take on the SP Tools Australian Kart Championship last weekend at the Go Kart Club of Victoria. With a team of nine drivers across five classes, the team was looking to make a big impact to kick off the series for Australia’s richest prize.

Jackson Brasher kicked things of for the Kart Class team by putting himself in third position to start the heats. Brasher ran inside the top group of drivers all weekend, with a second position in the final heat giving him great confidence going into the final. After a final chat to team owner Dave, Jackson was ready to give it his all. Brasher started out of position four and quickly made his way forward into second spot. The chase was on now to go after race leader Cruz Kelly and in the back end of the race the battle was on! Brasher made a move for the lead with a few laps to go and held his nerve in the dying stages to take an epic win! A winning start for the Kartclass team was a perfect start to the finals.

Kartclass had a three prong attack in the Cadet 12 class in Riley Harrison, Aiden Schweikert and Deargo Stewart. Harrison put in a sensational effort to qualify inside the top ten in position nine! Schweikert wasn’t far behind in position thirteen and Stewart was just outside the top twenty five in position twenty seven. Harrison did an almighty job in the heats, moving up to position six in the opening heat and then climbing to second in all the remaining heats! Schweikert and Deargo both had mixed results in their heats but by the final were looking to come home in the top twenty. Harrison put his Kartclass entry all on the line in the final hitting the front with a few laps to go with one hand on victory. In a dramatic final lap Harrison came across the line in an amazing second spot on the podium behind a current national champion. Schweikert burned his way through the field in the final to come home in position seventeen with Deargo just behind in position twenty two!

Riley Skinner was the sole Kartclass team member in the super competitive KA4 Junior category. Skinner was up against some exceptional drivers and did a good job in qualifying, coming just outside the top twenty in position twenty one. Skinner had a rocky start to his racing with a DNF result. Riley bounced back in the next two heats with two top fifteen results in position fourteen in both heats. Skinner dropped down to position nineteen in the fourth heat and was looking to move back forward in the final. Riley drove his heart out to get back up into the top fifteen and come away with an exceptional position fourteen overall in the final!

Three Kartclass drivers took on the ultra-competitive premier KA2 Junior in Ben Holliday, Miley Miller and current state champion Peter Bouzinelos. Holliday set the tone in qualifying putting himself in the top ten in qualifying. Miller was just outside the top fifteen in position sixteenth with Bouzinelos down the order in position twenty seven with work to do. Holliday did an excellent job in the heats, taking an opening heat win and finishing top five in two orders. Miller was consistent throughout getting just outside the top five in sixth in one of her heats. Bouzinelos put in an incredible fightback moving forward from his starting spot every heat and even winning heat four. The final unfortunately didn’t go the way of the three drivers with all of them coming into trouble. All three drivers showed over the weekend they can mix it with the best in the country!

Jaxon Johnstone was the only senior driver under the Kartclass banner runner in the ultra-competitive X30 class. With around sixty entries in the field Jaxon had a tough weekend ahead. Johnstone qualified in position twenty nine and was looking to move forward in his split heats. Johnstone had an excellent Saturday moving forward in all races and coming home inside the top ten to finish heat three. A DNF hurt Johnstone starting spot for the final but he was keeping positive and wanting to charge forward. In the combined final Johnstone moved his way inside the top twenty finishing in position nineteen moving up ten spots from qualifying!

Team owner and eighteen time national champion David Sera spoke of the teams results post-race. “I couldn’t be prouder of our team to win Cadet 9 and podium Cadet 12. We also won races in KA2 with two drivers, so to be sitting second in the team’s championship is great reward for the whole team”. Kartclass will head to the second round of the SP Tools Australian Kart Championship sitting second in the teams championship looking to chase the number one spot!