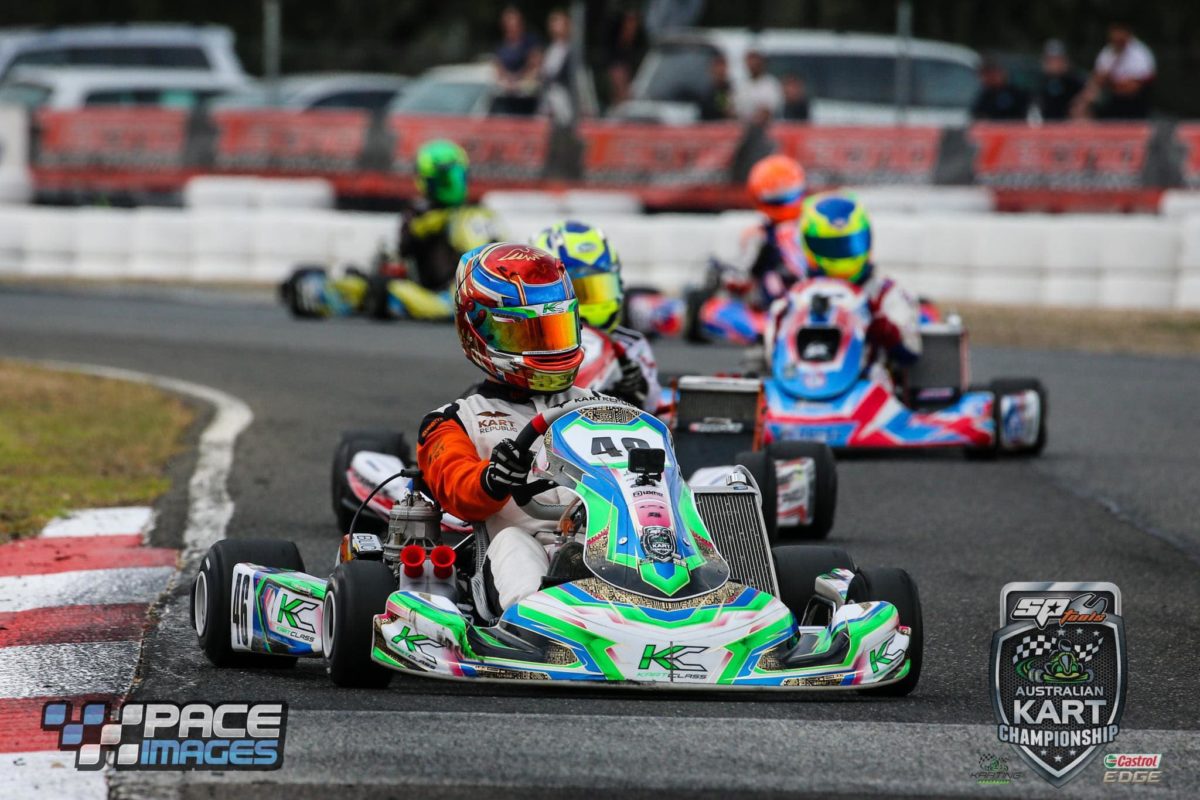 Kartclass left the opening round of the SP Tools Australian Kart Championship second place in the team’s championship! With nine drivers across five classes, the team headed to round two at Bolivar raceway in excellent spirits. The team led by eighteen-time Australian champion David Sera was looking to continue their excellent start to the championship. The team knew they were in for a fast and furious weekend of racing!

SP Tools Australian Kart Championship round one winner Jackson Brasher and stablemate Jay Kostecki were racing around in the Cadet 9 class with both drivers showing excellent pace. Brasher led the charge for the team crossing the line in the top three for all of the heat races. Kostecki also had extremely strong pace, running inside the top five throughout the heats coming away with a second-place finish in heat two. The final was a hectic race for both drivers as they battled inside the lead pack. Brasher was able to come away on the podium in second position overall with Kartclass first podium result of the weekend. Kostecki battled around the edge of the top five coming home in an excellent sixth position overall!

Round one runner up Riley Harrison and Aiden Schweikert were the two Kartclass entries taking on the ultra-competitive Cadet 12. Both drivers started well in qualifying with Harrison inside the top five and Schweikert just outside the top ten in position eleven overall. Harrison was a class act in the heats, taking two victories and fourth place to go with it. Schweikert had a couple of rough heats but was around the top ten or in the top ten in all of his heats. In the combined final Harrison was in the lead and stages and was right in the battle for victory! Riley just missed the podium grabbing fourth place and gaining more valuable points for his championship. Aiden battled throughout the final and pushed his way towards the top twenty. Schweikert came home just outside the top twenty in position twenty-two overall!

Riley Skinner took to the track in the near capacity field of KA4 Junior. Skinner qualified just outside the top twenty-five in position twenty-seven looking to move forward. Skinner did a great job in his first three heats making up a total of thirty-two, with an eleventh in heat three the highlight. Skinner had an unfortunate DNF in heat four hurting his starting position for the final. Skinner was able to make his way inside the top ten for the final coming home in position twenty overall in an excellent showing.

Local Driver Ben Holliday, Peter Bouzinelos and Miley Miller were the final three Kartclass drivers running over the weekend. Unfortunately, Holliday was involved in an accident and then wasn’t able to take place in the weekends racing. Bouzinelos led the charge in qualifying, putting himself up on the outside of the front row in second spot, with Miller just outside the top twenty in position twenty-two. Peter was a class act in the four heats never leaving the top three and coming away with two heat wins. Miller showed excellent pace having a twelfth in heat two. Due to two DNF results Miller had unfortunately missed the cut for the final field. Bouzinelos was driving one of the races of his life leading the field when an unfortunate rear bumper issue took him out of the lead when victory looked on the cards!

Team Manager David Sera spoke post weekend of the highs and lows of karting. “We had a victory taken away from us with a 50c bolt snapping in the final with Peter, but showed once again our prowess in the Cadet categories with Brasher, Harrison & Kostecki all fighting for podiums” Kartclass will be back on circuit this weekend for the Victorian Open Championships at Eastern Lions.