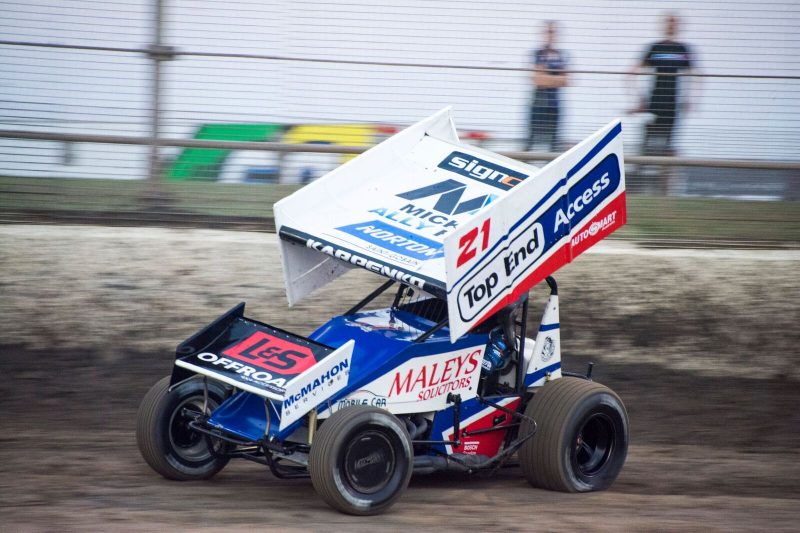 Heading into this year’s Northern Territory Title, which was an event he has finished second in 2016 to Ben Atkinson, the pilot of the NT # 21 Top End Access / Maley’s Barristers and Solicitors supported Maxim was one of the favourites off the back of three feature-race wins from five race meetings (minor podium finishes in the two others), and at the fall of the chequered flag for the 30-lap event he proved too strong for his rivals.

Qualifying on the inside of the second row for the Northern Territory Title deciding feature race, it didn’t take Karpenko too long to work his way to the pointy end of the field and by the eighth lap he had wrestled the lead from Jason Gebert. Once out in front, Karpenko was never headed and went on to record a convincing victory and the fourth feature-race success of the 2018 season.

For Karpenko, winning the Northern Territory Title has been something hunting since he stepped into 410 Sprintcars and he was relieved to finally achieve it – adding to his Western Australian Late Model Title that he had won back in 2006 at the Perth Motorplex.

“To win your home state title is a massive honour, not only for me but all of my team and our valued local sponsors,” the 32-year-old racer expressed.

“The track all night was in a great shape and there were various race lines to run throughout the feature race and it saw plenty of close racing. My team did a fantastic job with our car setup choice and it paid off with the best possible result.”

To say that Karpenko is in great form heading into the Chariots of Thunder Series, which is to be fought out over four nights over two weekends at Northline Speedway beginning this Friday and Saturday night, would be quite the understatement.

“I’m really happy with this season’s form so far and the plan is to continue that over the next fortnight,” commented Karpenko, who finished third in last year’s Chariots of Thunder Series point standings after leading it going into the final round.

“With some of the country’s best teams, it’s going to be very tough, but I’m looking forward to the challenges that lie ahead, and hopefully I can enjoy a consistent run and see where I end up at the end of the four nights.”

Just in time for the commencement of the Chariots of Thunder Series, Karpenko and his team have their 2018 merchandise available for purchase. They have black and navy colours available in mens, ladies and youth t-shirt sizes. Prices are adults $35 and youth $25. There are a limited range available, so be sure to get in quick. You can purchase them at the track, Autosmart NT or order them online, by contacting the team via their Facebook page: Chace Karpenko Racing.

To find out more about Karpenko and his team, LIKE them on Facebook by searching Chace Karpenko Racing.