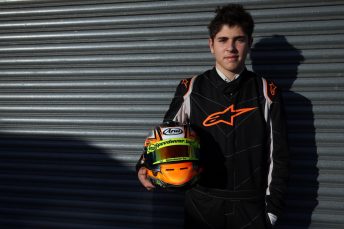 The 18-year-old from Beirut, who was born in Los Angeles in the USA and is now based in London where he is studying at the Hult International Business School, becomes the first Lebanese national to compete in the UK’s FIA sanctioned Formula 4 category. He arrives in the championship as a genuine car racing rookie with only a few days of testing under his belt thus far.

Regardless of his lack of experience in single-seaters, Massaad has certainly performed well up to now at the wheel of Double R’s F4 car and in officially timed pre-season testing at Oulton Park in Cheshire earlier this month, in changeable conditions, he lapped inside the top 10 and within 0.4 seconds of more experienced new team-mate Linus Lundqvist.

“Karl is a mature and smart driver and certainly has the potential to go a long way in single-seater racing from what we have seen so far”, said Double R team principal Anthony ‘Boyo’ Hieatt, “He’s only had a very limited amount of time in the car up to now but has made significant progress.

“He’s a great young talent to work with and actually reminds me very much of a young Carlos Heurtas [former Formula BMW and British Formula 3 racer with Double R]. We’re sure Karl is going to be a driver to watch as the season unfolds, we’ve got high hopes for him.”

Massaad, whose career is guided by Middle East Motorsports Management, started out karting in Lebanon in 2011 before progressing well through the X30 Super Shifter ranks on the European and World Championship stage.

He arrives in the F4 British Championship off the back of his most successful karting season by far last year, having become 2016 Lebanese X30 Super Shifter Champion with a remarkable 100% tally of race wins. Massaad also received the FIA Young Driver International Seminar award and was third in the X30 Super Shifter European Championship and fifth in the World Championship.

Looking ahead to his maiden season in F4, Massaad said: “Being my first year in cars, I want to try and get up to speed as quickly as possible and hopefully push for the top five in the championship, that would be amazing.

“For sure, I want to try and take two or three podiums and then my aim is to try and move into F3 the year after. I’ve only had six days of testing so far, but it’s gone well and I’m quite confident for the season. It’s amazing to be working with a team like Double R in my first season in cars.”

Brands Hatch Indy Circuit in Kent will host the opening three races of the F4 British Championship season over the weekend 1st/2nd April.