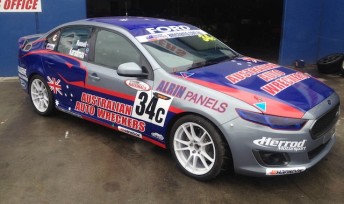 A brand-new Ford machine is on its way to the Australian Manufacturers Championship, with George Karadimas of Australian Auto Wreckers Racing unveiling a latest generation Ford Falcon FG-X XR6 Turbo as his weapon for the 2015 season.

Karadimas will debut his new #34 entry in Class C of the opening round of the AMChamps at Sandown Raceway across March 27–29, sharing the driving duties with experienced racer Geoff Russell.

The AAW team was the only Blue Oval representative (in a 2013-spec Ford Falcon FG XR6T) at a number of last year’s AMChamp events and are currently the only team to have submitted a Ford as a series entrant for this year.

Karadimas said he was proud to be flying the Ford flag in the AMChamps in the last Falcon to be produced by the marque – the same model that is currently being campaigned in the V8 Supercars series.

“My business Australian Auto Wreckers is a late model Ford dismantler and my father also has a long association with the Ford Motor Company which he has had since the seventies. We have always had Fords and run them in various categories and we are certainly extremely proud to be running the latest generation Falcon – for us it is Ford or nothing really,” said Karadimas.

“The fact that it is the last Falcon to be produced makes it that little bit more special for us, but also sad. The livery was chosen as a tribute to Ford Australia given the fact that this Falcon model is the last to be manufactured in Australia – it is very sad to see the end of an era, but we are happy to be able to do this small thing as our own little send-off.”

The #34 Australian Auto Wreckers Ford Falcon FG-X XR6T will benefit from twelve months of development work on the previous AAW entry, as well as the experience of long-time racer and three-time speedway champion Russell.

“It is a fantastic car, and while it is heavier than our last model entry we have done a lot of development over the last 12 months and we expect to be faster than in 2014 despite its weight,” said Karadimas.

“I can’t wait to see how it does in 2015 and I am sure as a team we will benefit from the experience of Geoff Russell. He has finished sixth outright at Bathurst with Rusty French, raced many AMChamp events and has three speedway titles – he knows his way around a race car and I can’t wait to see what he thinks of what we have put together.

“It is shaping up to be a great year, and I would really like to thank Rob Herrod of Herrod Motorsport, Casabene Excavation and Drainage and Alrin Panels for throwing their support behind us once again in 2015.

“We are really excited to get back on-track with the AMChamps this year – it is a very good series with a much wider relevancy I think than some others – what you see racingon Sunday, you can go and buy on Monday. There isn’t many categories where you can truly buy exactly what you have watched racing around the track. It has a good mix to it, and I will take endurance racing over sprint racing any day of the week – it is very strategic and you have to be right on the ball, which I think really adds to the atmosphere and competiveness of the category.”

For more information on the Australian Auto Wreckers team, go tohttps://www.facebook.com/AustralianAutoWreckers or http://www.austautowreckers.com.au/