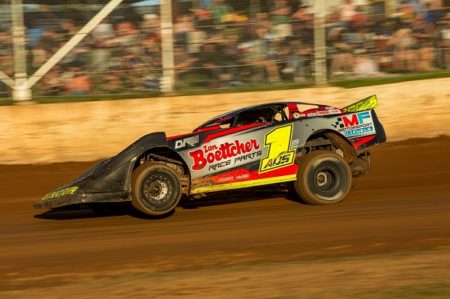 “They say, you know when it’s time to hang up the helmet, and for me, that time is now,” expressed the current and four-time National Super Sedan Titleholder.

“Over the past 12 months, I haven’t been feeling the same about my racing than I once did over the previous 31 years of my career, and I feel that my fire for racing competition just isn’t there anymore.”

Kane continued on by paying homage to the Ian Boettcher Race Parts team for all of their support over the past two decades.

“I can’t thank everyone from Ian Boettcher Race Parts enough for what they have done for me as a driver, and I feel that we have both pushed each other to greater heights over the years as a team and that is reflected by our results over the years,” said Kane, who apart from Australian Title success has won multiple National Series point scores (x 5) and state titles (x 15) during his career.

“I’ve been employed by Ian Boettcher Race Parts for 20 years now selling race parts, and we have enjoyed plenty of success out on the track since I took over the team’s driving duties during the 2006-07 season.

“The Ian Boettcher Race Parts team are a determined bunch, who never quit. There have been numerous occasions over the years when we had encountered issues during the heat races and I thought our night was done, but the team thought otherwise, and there were a lot of times we were able to get the car repaired and ready to go for the feature race.”

When it comes to the highlights during his 32 years of speedway racing, which included a lot of success in Super Sedans and Late Models and also short stints in both 410 Sprintcars and Speedcars, Kane feels that it’s hard to go past achieving the top status in the country.

“Winning four National Titles in Super Sedans and two Australian Titles in Late Models is a tremendous honour,” explained the 52-year-old racer, who moved to Ipswich in Queensland on the mainland in 2001 from his Hobart, Tasmania base.

“Over the years, I’ve pretty much won every major event in Super Sedans, but the feeling that you get, not only for yourself but the entire team, when you win a National Title is like nothing else.”

Looking ahead to the future post-retirement, Kane is excited about what is ahead.

“I’m really looking forward to playing more of a mentor role to fellow drivers, and I feel that I have gained a lot of experience over my 32 years, so now that it’s time to share all of this knowledge and give something back to the sport on a greater level,” he enthused.

Despite being shocked by Kane’s retirement decision, the Ian Boettcher Race Parts team looks back on their successful partnership out on the track with a lot of fondness.

“We achieved a lot of success with Darren out on the track and made a lot of wonderful memories along the way,” said Nathan Knight from Ian Boettcher Race Parts.

“Although we are sad about Darren’s retirement, we are very proud of what we achieved together around the country across both Super Sedans and Late Models, and there is no doubt that Darren will go down in history as one of the sport’s greatest ever Sedan competitors.”

For now…the team’s focus is on this Saturday night’s Queensland Super Sedan Title at Mothar Mountain Speedway and sending Kane out a winner.