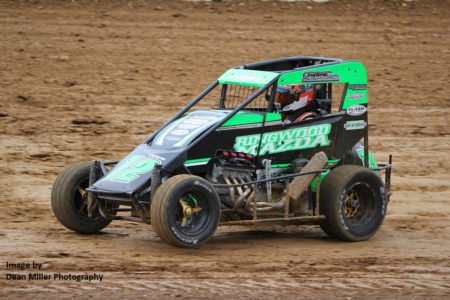 The Victorian Compact Speedcar Club headed to Redline Raceway on Mount Buninyong for the latest important feature event, this time honouring the late Keith Astrella. A small yet enthusiastic line-up was on hand for the event with Jamie Paull and Butch Hutchinson returning to competition.

Officials negotiated a three heat and a final format with the host club Belmont Speedway Drivers. Heat one did not go well for Jamie Paull (# 21 Yamaha R1/Razor – Explosion Plumbing) who had a malfunction in the steering in heat one as he was flying through turns one and two and slammed the wall hard leaving too much damage on parts and set-up to continue on for the evening. Justin Paull continued to win the race from Butch Hutchinson, Louis Rodriguez, Mark Hutchinson and Ann Clarke (# 66 Yamaha R1/Stealth – R V Repairs).

In the second heat Justin Paull had a terrific start to lead. The ten lap heat looked like it was going his way with Louis Rodriguez in second when Rodriguez (# 11 Yamaha R1/Stainer – 1Stop Property Services) slowed to pull out with what was confirmed as engine issues that put him out for the night whilst a lap later on lap seven Paull pulled infield also with a fuel pump issue just after setting a one lap record for the class at the venue of 14.432, whilst Butch Hutchinson stormed to the lead and onto victory in front of Hallett, Mark Hutchinson (# 6 Yamaha R1 /Robo – Associated Power Coating) and Clarke.

Competitors then came out to compete in a shortened six lap final heat which turned out to be the closest margin of the three qualifiers in the end, when Butch Hutchinson (# 2 Suzuki GSXR/Stealth – Kay Mainline) won by just .833 of a second in front of Hallett, Mark Hutchinson and Clarke. Paull led lap one and two before exiting the race after his drive adaptor came loose and slide off the back of the engine ensuring power was not getting to the wheels, then his sister Tania Hallett (# 15 Honda CBR/Beast – Flash Heating & Cooling) took over until lap five when Hutchinson sped past her and onto the win.

A ten-lap battle remained for the competitors to settle who would be the Keith Astrella Memorial winner for the 2019/20 season and Justin Paull (# 12 Suzuki/Spike – Ringwood Mazda) got the best race start surging to the front on lap one.

At the presentation Paull shared his fondness of Keith, as did all the other podium finishers. “Keith helped me in my early transition into Compact Speedcars after leaving Junior Speedway racing and he taught me a lot and helped me with things I needed or things I needed to do. He loved this class and we all miss him being around. I am stoked to have won the race and can now always be able to say I won Keith’s race.”

Keith’s son Matt Astrella and Matt’s daughter Lily were on hand to help present the family supported trophies made by EB Graphics & Designs.

Tania Hallett won the Petronas supported best presented car selected by a spectator on this occasion, for the second time. Tania wins a selection of terrific prizes provided by the wonderful team at Petronas.