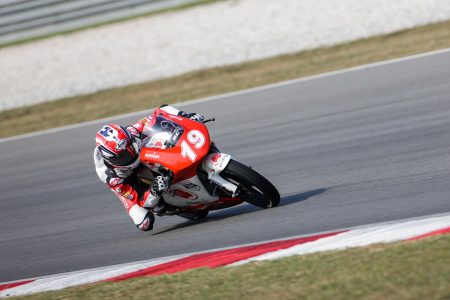 The line-up for the 2019 Junior Talent Team has been revealed, with a selection of riders from the Idemitsu Asia Talent Cup and British Talent Cup set to race with the team in the FIM CEV Repsol Moto3™ Junior World Championship. Promoting and running talents from different paths on the Road to MotoGP™, the JTT unifies three team names under the same umbrella and unites the efforts of Dorna talent promotion programs, including the sponsors and partners who provide important backing to young riders and teams. In 2019 the project continues to count on the valuable support of Honda, Kushitani and Astra Honda.

Max Cook arrives in the JTT fresh from a top season in the British Talent Cup, where he took a number of wins and was a consistent pacesetter and frontrunner. Cook also has experience in the Red Bull MotoGP Rookies Cup and the European Talent Cup ahead of this next step as the British Talent Team rider in the JTT.

Bill Van Eerde makes the step to the FIM CEV Repsol as the reigning Idemitsu Asia Talent Cup Champion after being crowned in the final round at Sepang International Circuit. The first Australian IATC race winner and Champion, Van Eerde will be racing in the JTT alongside the rider he narrowly beat to the crown: Haruki Noguchi from Japan. The two join Yuki Kunii, the veteran of the squad and now a Moto3™ Junior World Championship race winner aiming even higher in 2019, in Asia Talent Team colours.

Mario Aji from Indonesia is the final rider in the JTT in 2019. An IATC race winner and standout performer at many rounds in 2018, ‘Super Mario’ moves into the Junior Talent Team structure in Astra Honda Racing Team colours.

After race wins, multiple podiums and some impressive showings in 2018, the JTT is now ready to attack a new season with a number of new faces – with experienced Kunii ready to lead the way. Action begins for the five riders with a winter training camp soon to be confirmed, before racing starts on the 7th of April at the Circuito do Estoril in the FIM CEV Repsol season opener.