Late Models are regarded as one of the biggest classes in the world of speedway, and thanks to the Late Model Racing of Western Australia association, they are once again providing young racers with the opportunity to sample the class through their Junior Development Program. 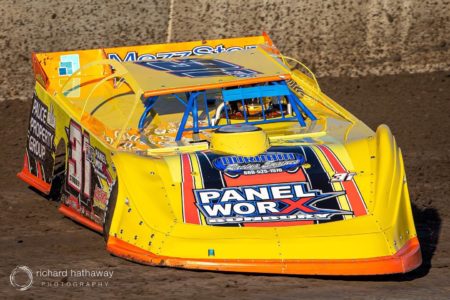 This year’s Junior Development Program comes off the success of last year’s inaugural program that offered two young Junior Sedan drivers in the form of Blake Webb and Blake Iwanow the chance to drive a Late Model around Kellerberrin Speedway in Western Australia.

Veronica McCann, who is one of the Junior Development Program founders, is excited about this year’s program.

“I’m really looking forward to this year’s program, especially since this year’s program is going to open to all forms of motorsport competitors within the required age bracket,” enthused McCann, who aside from being a current Late Model racer has spent time in Sprintcars and also Indy Lights on the road racing circuit over in America during her career.

“This program is all about giving youngsters an opportunity to get behind the wheel of a Late Model and to try and give them a bit of help when it comes to their next move once they graduate from juniors. Just like with Sprintcars, Late Models are one of the few speedway classes where you can legitimately make a career out of racing.”

“When I was finishing up in Junior Sedans, I was provided with numerous opportunities to sample a few classes and they were very much appreciated,” she explained.

“For me, this Junior Development Program is all about paying it forward and helping introduce youngsters to the world of Late Models.”

This season’s Junior Development Program is going to be run late this year at a track yet to be announced. Applications are currently being sought after and they will close at the end of the month.

To submit your Junior Development Program application, visit the official LMRWA website www.latemodelracingwa.com.au and go to their information section.