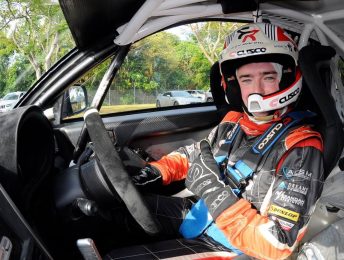 I thought it was time for a quick update about our rallying this year. Going forward, we’re aiming to do:
– APRC Asia Cup
– WRC Rally Australia

It has been a tough few months for us with no rallies and no time behind the wheel except for Rallyschool WA. Unfortunately, our one-off event at APRC Rally Canberra didn’t go well. With a crash in testing due to brake failure, the car was too badly damaged to compete in the rally so we had to withdraw. But there is good news below!

It is a huge relief to finally say after basically 8 months without a rally, Malcolm Read and I are now confirmed to do the Asia Cup. We will again be driving for Cusco Racing with support from Dunlop Tyres Japan. Being back in a Subaru Impeza will be good for us as it’s a car I know very well and one I’m very confident in. I would like to say a big thank you to Cusco for giving us another opportunity. They have been very loyal to us over the last six years and their support means a lot. I can’t wait to thank them and Dunlop with some good results.

So, first up will be the Malaysian Rally, and it’s one rally that I have a love hate relationship with. I have competed in the rally five times. I have finished it twice including a win but three non-finishes have made this rally tough for me. Simple mistakes here have always cost me badly, so this year I aim to beat the hoodo and finish! Easier said than done in the tricky plantation roads which turn to ice if it rains.

After Malaysia will be Rally Hokkaido in Japan; one of my favourite rallies and in the home of Cusco. This will be a rally where we will target a good result, especially as it’s a rally I know and one that has been good to us in the past. The Japanese fans are always great to be around and we have a big fan base there.

We are very close to confirming a drive at WRC Australia and I’m excited as it will be my first WRC event. The team we’re planning to drive for are very experienced on the international stage and its likely I’ll have team-mates from many different parts of the world. Details on the car and team will be released once everything is finalised. Soon, I hope!

And finally – a big thank you too those who have followed my career so far. We have had some low moments but mainly, we’ve enjoyed many great successes. Lets see what the future holds and thanks again for joining me.

Until next time,
Mike