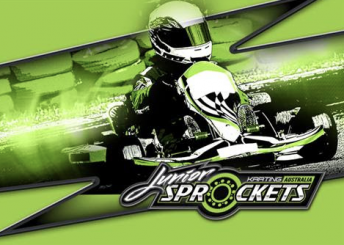 MEDIA RELEASE: The dates and venues for the SP Tools Junior Sprockets Days to be held in the July School Holidays have been confirmed.

The Junior Sprockets program is an opportunity for youngsters between the ages of 6 and 14 years to get behind the wheel of a kart for the first time.

These days are designed to provide budding young karters with the thrill and excitement of kart racing in a safe and controlled environment while being educated by professional instructors and drivers.

All karts and safety equipment are provided for the participants in the Junior Sprockets program.

In addition to the Junior Sprockets ‘Beginners’ program, there are also a limited number of places on each Junior Sprockets Day where youngsters who have held a Karting Australia licence for less than two years can participate in an Intermediate program.  In the Intermediate program the participants use their own equipment while gaining advice on technique and driving skills from the professional instructors and drivers.

A further three events will be held in Victoria, Queensland and New South Wales on September 21st, 28th and October 4th respectively.  The venues for these events will be finalised in the coming weeks.

A modified version of the Junior Sprockets program will be held in both Northern Territory and Tasmania in the last quarter of 2016.