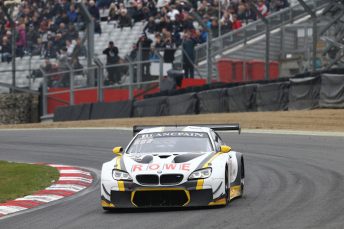 St. Ingbert, 7th May 2017 – Joy over the fourth place of the “Flying Finns” Jesse Krohn and Markus Palttala and strong performances in the qualifying sessions and the qualifying race, but also frustration and disappointment over the retirement of the two BMW works drivers António Félix da Costa and Philipp Eng through no fault of their own: the first of the “back-to-back races” in England of the Blancpain GT Series was a roller coaster of emotions for ROWE RACING on the ups and downs of the legendary track in Brands Hatch.

Both BMW M6 GT3s of the St. Ingbert team were among the front runners for much of the one-hour race of the Sprint Cup and sights were set on a very good team result. Palttala started the race from the front row of the grid in the #98 car after fellow Finn Krohn with the third-fastest qualifying time under his belt laid the foundation for starting in second place and the “mini” podium with the third-fastest qualifying time on the very first lap of the qualifying race. After a fiercely contested first half of the race, Palttala was fourth to enter the pits for a driver change as soon as the pit stop window opened. When the field had settled after the stops, Krohn was in fifth place which he held to the finish. Shortly after the end of the race, the driver pairing originally in fourth place were awarded a time penalty and reclassified in 17th place, which saw the two Finns move up into fourth place.

In contrast, Félix da Costa and Eng in the #99 sister car were extremely unlucky. Eng started from eleventh and made up four places on the first lap of the qualifying race alone. The Portuguese/Austrian duo ended up claiming starting position number five. They were also doing well in the race and had the podium positions within reach. Immediately after the driver change, from Félix da Costa to Eng, the Austrian was rammed by a rival who had been released too early in the pit lane, and he also had to dodge a tyre. The BMW M6 GT3 right front suspension broke in the collision and Eng, slightly injured after the violent impact caused the steering wheel to be wrenched from his hand, was forced to park the car at the pit lane exit. The drive-through penalty imposed on the driver responsible for the crash, and his later retirement, were not enough to ease the disappointment for Eng of the missed points or Félix da Costa on a possible podium result on his race debut for ROWE RACING.

This coming Sunday (13th May) sees part two of the “back-to-back races” in England on the Formula 1 track in Silverstone, where a Blancpain GT Series Endurance Cup race will be held.

Markus Palttala, ROWE RACING #98 BMW M6 GT3: “I’m trying to focus on the positives of this weekend, and am very happy with our performance and the improvements compared with Misano. There we only just made it into the top 30 in qualifying, and here we were right at the top and were able to battle for the podium in both races. It goes without saying that we would have liked to finish on the podium in the main race, but the problem was my start. The two Lamborghinis accelerated much earlier than I expected, which meant I got stuck behind slower cars. If I had stayed in second place, we probably would have finished in second place. But overall it was a good weekend and the season has only just started.”

ROWE RACING team principal Hans-Peter Naundorf: “Overall, we can be very pleased with this weekend since our team did a great job and all of the drivers were at the top of their game and for that I would like to thank everyone in the team. Both cars being among the top 5 was a strong performance and a big step forward, for which we were rewarded with the podium in the qualifying race. Not being able to claim the second podium in the main race dampens our spirits only slightly and the retirement of the second car after an unsafe release in the pit lane was just bad luck. Things like that can happen at any time and there was no intent on the part of our rivals.”