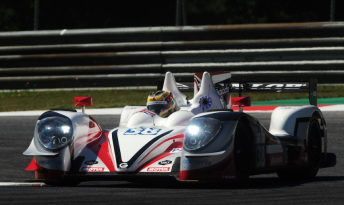 The British team that was denied the 2014 championship title by a mere four-points now lead this year’s standings by 2pts with two races remaining having placed second and third in earlier ELMS races.

Simon Dolan, Filipe Albuquerque and Harry Tincknell swept their JOTA Gibson-Nissan to glory in the Four Hours of Red Bull Ring – the “Mighty 38” taking the chequered flag 27.478-seconds ahead of its closest challenger having completed 151-laps at an average speed of 114.27mph.

Albuquerque started the race from pole-position on the 29-car grid, Tincknell having set the fastest time in qualifying around the fast and sweeping 2.688-mile Austrian circuit for the second consecutive year to earn JOTA a third ELMS pole in Austria.

A Safety Car period after 11mins nullified a 6secs lead advantage then another cruelly wiped out the Portuguese’s 10secs advantage on 37mins.

He pitted for fuel approaching mid-distance and returned to the action with a 13secs lead.

Despite struggling with a lack of grip in the 30°C heat, Simon did an outstanding job under intense pressure to keep his Gibson ahead which ultimately decided the race before Tincknell took the wheel under Safety Car conditions with 88 minutes to run.

With an hour remaining, the JOTA Gibson had a seven seconds lead, Harry comfortably extending the advantage to almost 19secs before making his final stop for fuel with just 23mins remaining.

Tincknell resumed second, 20secs down, but was almost immediately back in front when the leader was summoned by the race organisers to serve a stop-go penalty for a pit-lane exit infringement.

While the victory marked JOTA’s first in the ELMS since last May, the 2014 Le Mans 24 Hours LM P2 class winning team which finished runners-up in this year’s twice-around-the-clock race, JOTA Sport had won its class in the FIA World Endurance Championship’s Spa-Francorchamps race.

The penultimate round of the five-race ELMS is staged at Paul Ricard in Southern France on 6 September.